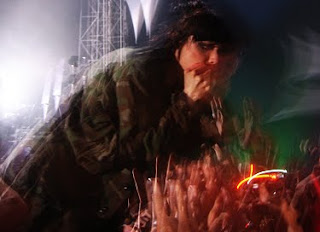 When I listen to music, I find it best to listen to it out of context - perhaps one of the reasons I've begun listening to older albums, although those too are often wrapped in nostalgia or "retro" appeal. Music relies on context to peddle middle-of-the-road crap, but it can negatively affect good artists too, leaving them in a black hole of publicity and PR that colours the music, even if it is many miles from public perception.
Ben introduced me to Crystal Castles a couple of months ago. I think they're great - messy yet concise electronica with chiptune stylings and the shrieks of Alice Glass providing an antithesis to anthemic crap that can be found filling the charts on a regular basis. It's abrasive, claustrophobic, terrifying music (or so I think, anyway). So you can imagine my surprise when, hearing that I was going to Crystal Castles at Glastonbury, a near-stranger turned his nose up and told me they were for twelve-year-olds. I ignored him.
So it was a disheartening surprise that the majority - or at the very least a significant portion - were underage girls. I couldn't get my head around it. Were they here for the riotous crowd and destructive stage show? Or for NME cool list-topping* Alice Glass? I presumed it must have been a combination of the two, because I couldn't imagine the fifteen-year-olds were enjoying the music.
Speaking to a friend (who watches the music industry much closer than I do) later, I asked him why and how Crystal Castles have managed to build up a fanbase of kids.
"It's all about timing, isn't it?" he told me. "Nu-rave. They were grouped with Klaxons and the Gossip and the rest."
* Not that I place any meaning in any magazine's "cool list" personally.
Posted by elliot