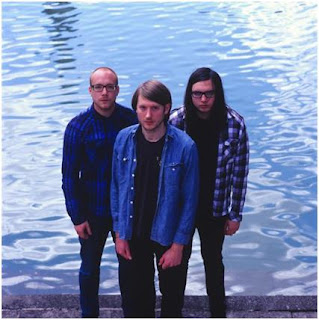 Pitched somewhere between the raucous loud riffing of Foo Fighters and the brilliantly catchy melodies of Weezer, Dinosaur Pile-Up are destined to become many people's "new favourite band". Hailing from Leeds, DPU certainly know how to make an almighty racket. For a three-piece (with constant frontman Matt Bigland, and recent bass and drummer replacements Harry Johns and Mike Sheils), the sound is big, often pretty heavy and very tight.

With last year's frankly awesome E.P "The Most Powerful E.P In The Universe!!" still ringing in my ears, I was delighted to hear excellent new single 'Birds & Planes' had been uploaded to their MySpace page, paving the way for debut album "Growing Pains" to be released in September. On evidence of the single and all preceding releases, of which there are genuinely no dud tracks, there is no reason at all why the album shouldn't be both critically and commercially successful.

Having toured with Dananananaykroyd, been hotly tipped by Zane Lowe and been hand-selected to support Pixies on one of the London dates on their Doolittle tour, things are pretty much ready to blow up for Dinosaur Pile-Up. From then, the noise is only set to get louder.

Links:
MySpace | Tour Dates | Buy "The Most Powerful E.P In The Universe!!" at Amazon