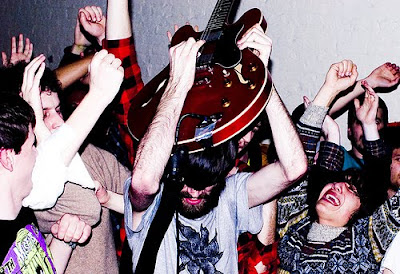 In a Quiff Pro ‘Fro first, we have a crossover post! Is it a live review? Is it an introduction? Who knows! Who cares? I presume very few of you.

The thing is, Titus Andronicus are probably too big to have an ‘Introducing’ feature written about them, but in my period of pre-gig over excitement, the majority of people responded to said excitement with a “Who are they?”

So, here goes: Titus Andronicus, named after an apparently violent Shakespeare play (who knows? I’m hardly an English student. Oh wait…) hail from New Jersey in America and make quite an almighty racket, blending lo-fi punk, covertly brilliant singalong melodies with an unmistakable ‘NJ’ sound, and a sense of the epic. Imagine if Springsteen got into a bar-brawl, and then wrote a totally awesome soundtrack for it. Now you’re probably about halfway there.

Currently Titus Andronicus are two albums into their music career – the first, 2008’s The Airing of Grievances, was almost a statement of their intent; simply to be a wholly passionate and thrilling rock and roll band. It also deservedly won them a dedicated fanbase through tracks such as ‘Titus Andronicus’ and ‘Upon Viewing Brueghel’s “Landscape With The Fall Of Icarus”’. Before long, they were making a name for themselves as one of the best new live bands on the circuit.

This year saw the release of new album The Monitor, a different beast to their first. Whilst Grievances… hinted at the scope the group aimed for in their songwriting, this was truly realised in their second LP. A concept album about the American Civil War, the average track length is six and a half minutes, and ranges from anthemic choruses, furious punk riffs and incredible guitar solos. The Springsteen influence is more pronounced with gorgeously played piano, there are quotes from Abraham Lincoln, and even Craig Finn from The Hold Steady reads a Walt Whitman poem. Oh, and in the ambitious fourteen minute closing track ‘The Battle of Hampton Roads’, there’s a bagpipe solo.

I highly recommend you check out The Monitor – it’s certainly one of the best albums this year, and particularly in the past few weeks has utterly captured me in a way that albums with predominantly seven minute-plus songs rarely do. The lyrics, once you tune into lead singer Patrick Stickles’ voice, are also utterly brilliant, such as in the Boss-riffing ‘A More Perfect Union’ (I never wanted to change the world/But I’m looking for a new New Jersey/’Cos tramps like us, baby they were born to die!) and the incredible ‘Four Score and Seven’ (Humans treat humans like humans treat hogs/They get used up, carved up and fried in a pan/But I wasn’t born to die like a dog/I was born to die just like a man/I WAS BORN TO DIE JUST LIKE A MAN!).

On Tuesday 23rd November, Titus Andronicus came to Newcastle’s Cluny2, a wonderfully intimate venue perfect for their reputation of raucous live shows. Starting with The Monitor’s astonishing opener ‘A More Perfect Union’, it was less than five minutes into the set before both guitarists were in the crowd, playing with a thrillingly reckless energy. The Cluny2’s sound was perfect – the twisting solo that takes over the centrepiece of the track was crystal clear and amazing as on record. But what about the crowd?

As the song drew to a close, with little movement from the majority of audience members, the atmosphere seemed only seconds away from really kicking off. A rolling drumbeat commenced another Monitor highlight, the jaunty ‘Richard II’, by which point I wasn’t going to stay still just because everyone else was. So I danced in my own space.

The set progressed, taking in old favourites ‘Titus Andronicus’, with a fantastically frenetic harmonica opening and repetition of "Your life is over!/Your life is over!" , and ‘Fear and Loathing in Mahwah, NJ’. The group played with an incredible energy and passion, and sounded totally brilliant. There was nothing more they could have done to get the crowd moving, and despite much in the way of cheering and clapping at the end of songs, while the group played nary a head bobbed or a foot tapped.

Thank god, then, that three songs from the end, a few enthusiastic fans at the front obviously couldn’t take the lack of movement anymore, and within minutes were surrounded by more people who were obviously also waiting for an opportunity to dance. The last twenty minutes of the set were an absolute sweaty knockout – the joy and enthusiasm emanating from the band finally found its way into the audience, with ‘Titus Andronicus Forever’’s refrain of "The enemy is everywhere!" being chanted excitedly. After pleas for an extra track persuaded the band to break their 11pm curfew, they closed the set with an astonishing, epic rendition of ‘Four Score and Seven’ that meant the evening moved from being highly impressive to unforgettable – I’m still buzzing from it now.

So please, Titus Andronicus – if you read this, please come back to the UK soon. We promise to dance this time.

Titus Andronicus’ second album The Monitor is out now – click here to listen on Spotify, or here to buy from Amazon.