I got a new pair of headphones for Christmas. They're not superawesome but they play music, which is more than you can say about my previous pair of headphones. One of the first tracks I played on my brand new headphones was 'Phantom Athletes' by a band called Fierce Creatures.
I've been playing this track pretty much non-stop for the last month and I've been meaning to blog about it for ages because it's one of the best - and undiscovered - songs of the last year. The EP it comes from, I Mostri Feroci, is tremendous as a whole (and probably should have been shoved into our Best Of 2010 list somewhere) - but this track is pure unadulterated magic.
Oh, alright. That was hyperbole. It is, however, one of the few songs of recent memory that I've been able to listen to over and over and over again, practically on repeat, without getting bored. In fact, this obsession has expanded and now covers the entire EP. 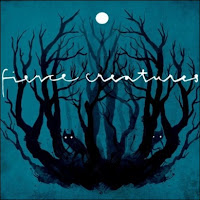 I've yet to determine exactly what's causing this phenomenon. Fierce Creatures are a practically unknown little band from California with about a thousand Facebook fans and less than two hundred followers on Twitter - which are silly measures of a band's credibility, yes, considering Justin Bieber is one of the most-followed (if not the most-followed) musicians on Twitter, but certainly a measure of their current popularity. Their music consists of familiar elements - powerful group singing a la Arcade Fire, guitars with reverb set to 11 worthy of The Edge and male and female singers providing a nice contrast - which, though nice, are all pretty bog-standard in contemporary rock music.
My only explanation is that the songwriting - a magical, mystical and sadly (for a scientist such as myself) unquantifiable process - is really, really damn good. And this is why I sometimes agree with that old cliché, that writing about music is like tapdancing about architecture. I could list all the disparate elements of this amazing, slightly spooky, EP to you, but that would convey very little about how the song makes me feel. Instead, I think it's best to just shut up and let you listen to it. And if you like the excellent free track 'Satan Is A Vampire' conveniently embedded below, I Mostri Feroci was the best $5 I've spent in a while.
Satan Is a Vampire by fiercecreaturesband
Posted by elliot