Album Review: Noah and the Whale - Last Night On Earth 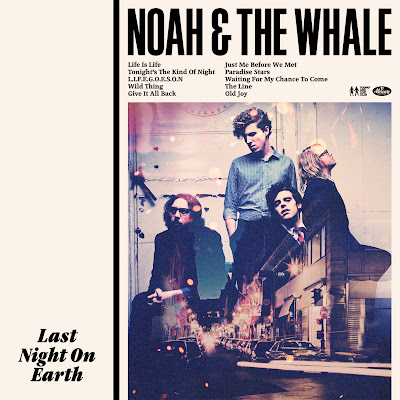 Anyone who's been following Quiff Pro 'Fro over the past year will probably have learned one thing - I absolutely, unashamedly love Noah and the Whale. To me, they're definitely one of the most underrated bands of the past decade, unfairly written off by many due to the commercial success of '5 Years Time', one of their weakest tracks, despite everything else they've ever done (a point I've made previously here). After 2009's astonishing but heartbreaking The First Days Of Spring, Charlie Fink and co. have returned with another absolutely brilliant album that marks, yet again, a bold step forward for the band, but with a noticable nod to the past.

If you've played The First Days Of Spring to the death, the first thing that hits you on listening to Last Night On Earth is the sheer, effervescent positivity that underpins the music. It's an album absolutely brimming with possibility, anticipation and potential. Opener 'Life Is Life' is a jaw-dropper, and a statement of intent for the rest of the album both in lyrical content ("And it feels like his new life can start/And it feels like heaven") and the production - gospel choirs, buoyant synths, and impassioned pianos combine to create an overwhelmingly hopeful three minutes. 'Tonight's The Kind Of Night' owes a huge debt to Springsteen (whose influence, lyrically from Darkness On The Edge Of Town and production style to Born In The U.S.A., can be found all over Last Night On Earth - he's even namechecked on 'Give It All Back') in a homage to the power of the night, the untapped potential of the open road, and the excitement of truly turning a significant corner in your life. As Fink succinctly puts it, "Tonight's the kind of night/Where everything could change/And tonight he's not gonna come back home".

First single 'L.I.F.E.G.O.E.S.O.N' may have nabbed a melody or two from The Kinks' 'Lola', but, again, Charlie Fink's lyrics stand out, making this song absolutely their own. His phrasing is simply brilliant, such that it's impossible not to be drawn to his characters. The highlight here is the second verse, in which Fink proves that he can make the ordinary sound extraordinary, creating vivid and deep personas in the space of a few lines:  "Some people wear their history like a map on their face/Joey was an artist just living out a case/But his best work was his letters home/Extended works of fiction about imaginary success". His mastery of simple but effective storytelling is apparent throughout the album's ten tracks, and just one of the reasons why this band need much more serious attention. They've come a long way since that song.

Bringing back the vast, glacial soundscapes of The First Days Of Spring comes self-proclaimed "murder ballad" 'Wild Thing', a wonderfully dark, gloomy treat in the midst of overt optimism. Apparently based on David Lynch's Twin Peaks, it's a tale of a girl who disappears for nine days, and returns "with blood stains on her shirt", "tangled hair and mud stains on her knees/Bruised ribs and rips inside her jeans". It's a brilliantly simmering listen, all crisp, icy guitars and haunting electronics, and in concerning the dark, dormant capabilities that lie hidden within people is likely to be a favourite for fans of the last album. It's a style revisited later in the album on 'The Line', a less dark but equally contemplative song with a similarly low-key feel.

In one of the most '80s sounding moments on the album (of which there are many), 'Give It All Back' combines new wave guitars with a marimba, creating a pop melody highly reminiscent of The Cure. It's also one of the most personal points on Last Night On Earth, as Fink switches from third person accounts of different characters to his own memory of playing a cover of The Beatles' 'Don't Let Me Down' in a school assembly. It's a heartwarming reflection as Fink surmises "I know for me that performance lives and never grows old", and one that remains a genuine highlight.

Following gorgeous piano interlude 'Paradise Stars' (which, at just 1.30, makes you wish it went on much longer) comes the fantastic 'Waiting For My Chance To Come', yet another dazzling pop song that cements Charlie Fink as a truly brilliant songwriter. It begins with an impossibly sunny sounding Rumours-era-Fleetwood Mac-esque acoustic guitar, before being backed up by one of the most noticeable uses of strings on the album, once a mainstay of their style, but scarcely seen here. With a shining chorus, it's yet again a brilliant example of the positivity oozing from every pore of this album, with a sense that there's always something amazing waiting just around the corner.

Simply put, final track 'Old Joy' is absolutely stunning, a beautiful, intimately epic piano ballad. Following a bustling, joyous album full of ideas and possibilities to a simple, pure closer is a wonderfully brave move that pays off brilliantly. Packed with emotional heft, 'Old Joy' concludes the album with the closing sentiment "Forget the things that get away/Don't dream of yesterday", an apt and laconic summary of everything that has come before. It's a phrase that'll refuse to leave you for days, with a lasting quality that may perhaps go unappreciated by some, but will truly remain with many.

Last Night On Earth is a bold, confident step forward for Noah and the Whale, and one which will hopefully see them earn fans from many who were less than impressed with their early output. The sterling pop songwriting and '80s style production on display here brings to mind Fleetwood Mac's Rumours (1977, I know...) and Springsteen's Born In The U.S.A., which is certainly no mean feat, and the fact that this album deserves to be mentioned in the same sentence as those two is a ringing endorsement. It's a brisk listen at thirty three minutes, but one that, thanks to Charlie Fink's incredible lyrics and fantastic delivery, will stay with you far longer than just this summer. Last Night On Earth is not only a classic in the making, but, to quote Fink himself in 'Give It All Back', truly "a victory for the kids who believe in rock and roll".


Last Night On Earth is out now - listen to it here on Spotify, and buy it here on Amazon.
Posted by ben

Email ThisBlogThis!Share to TwitterShare to FacebookShare to Pinterest
Labels: album review, noah and the whale