Today Elliot and myself went back on NSR to do the second of our focused, professional and enthusiastic live radio shows, and here in case you missed it (you scoundrels) is the show in podcast form!

In this episode, we play a selection of tunes that we've had on heavy rotation in the three months since our last show (some of which we've blogged about, some of which we haven't), discuss the disappointing new Arctic Monkeys track, Ben is shocked by Elliot's lack of Elbow love, and Elliot makes a controversial song choice. 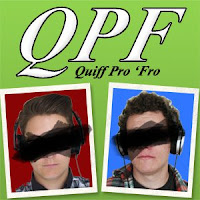