Arctic Monkeys: Please Sit Up, 'Cause Our New Single Is Ace 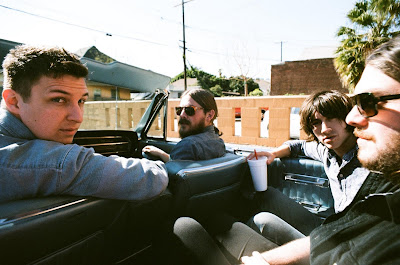 So, the new Arctic Monkeys single 'Don't Sit Down 'Cause I've Moved Your Chair' just had its first play on Zane Lowe's Radio 1 show as the Hottest Track In The World, and it's a bit of a belter. To give you that on a sense of scale, it's about ten times better than the pun in the title of this post (but, hey, I'm working at short notice here). And it's also a marked improvement on the disappointing 'Brick By Brick', an album track from the forthcoming Suck It And See which, whilst showcasing yet another new direction for the Sheffield four-piece, also contained some uninspired lyrics and melodies.

On first listen, 'Don't Sit Down 'Cause I've Moved Your Chair' is most notable for it's giant, thunderous rock'n' roll riff. When it kicks in, it's pretty much impossible not to grin and nod your head along - live, I bet it would sound bloody fantastic. It again displays a Queens Of The Stone Age influence, though less so than much of Humbug when the smooth, clean chorus vocals of cooed 'oooh's, comes around.

A significant improvement on 'Brick By Brick' is the lyrical content of the new single, which sheds the dull cliches such as "I wanna feel your love" for Turner's usual eloquent vocabulary. The dark, mysterious subject matter of Humbug seems to have returned ("Do the macarena in the devil's lair"), along with the quintessential Sheffield wit (as a song title and a sung refrain, 'Don't Sit Down 'Cause I've Moved Your Chair' hardly rolls of the tongue, but it's amusingly obtuse), which hopefully reveals that the lackluster lyrics of 'Brick By Brick' may be a minority on the album. That said, the "Go into business with a grizzly bear" line is certainly a bit of an odd one.

The last quarter of the track is pretty much a continuous build of squealing guitars, with some of the fretwork that proved one of the saving graces of 'Brick By Brick'. Overall, it's still got some of that classic '60s sound of 'Brick By Brick', but with a pounding, QOTSA-ey riff and, thank goodness, much more charm. Give it a spin and see what you think.

Don't Sit Down 'Cause I've Moved Your Chair by arcticmonkeys

The single is being released as a 7" vinyl for Record Store Day on April 16th. Buy it and pretend to be the girl in the 'Brick By Brick' video.
Posted by ben