A Chat With Victoria of Victoria & Jacob

Back in August last year, we published our first ever post on Quiff Pro 'Fro, an "Introducing..." piece on Victoria & Jacob, an electro-pop duo from London. Earlier this week I got a chance to catch up with Victoria herself on their recent goings-on.
“We’re just staying in the studio and working on writing new material,” she tells me on a sunny Easter Saturday, which she is spending on her own. “We’re not back gigging until May, and we haven’t done a gig since probably… November.”
A single, fairly cryptic video (embedded below) has been released of their experiments in the studio, but what does the new material sound like? “It’s still sounding indie-pop songwriting, I think,” reassures . “It’s dark and moody, but with dubby influences. We’re quite into the soul, electronica sort of stuff going on like James Blake.”
She tells me they’ve been playing with “samplers, synths, vocal effects, delays, and pitch-shifting”. “We really like the pitch shifting,” she says.
For fans of their older ‘folktronica’ material, that drew (unwanted) comparisons to Kate Nash, there is bad news: “That’s quite a long time ago now,” laughs . “I think we’ve moved on quite a lot since then – but we’ll let you decide that!”

Perhaps I come across as a little too big a fan of that early folktronica stuff, with its endearing glitchy beats and half-spoken vocals, because Victoria defends the new direction passionately.
“I think again it’s important to decide what you are and what genre you’re going to be in,” she argues. “You have so many different sounds to choose from in electronic music. In a band, you’ve got the bass players, the drums - the drum kit sounds the same every time, whereas we’re making a different track every time and using completely different sounds.”


In fact, with so many options at hand, the duo found themselves having to sit down and work out a precise direction for themselves. “We ended up writing a song and liking that, and then writing another song two months on that sounds completely different,” she explains. “So we decided to take some time out and develop a specific sound.”
With No Certainty by Victoria & Jacob 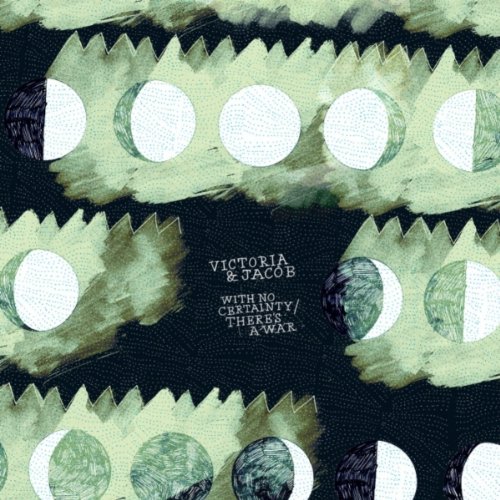 What kind of stuff has she been influenced by recently, then: does she has any particularly good recommendations?
“I’ve been listening to… Loads of different stuff, really. At the moment I’ve been listening to a band called Creep, some Witch house stuff, like Salem and that sort of stuff, stuff that’s a bit dark… lots of dubby sorts of stuff. A few tracks on Spotify by an artist called Becoming Real too.”
If these name-drops are anything to go by, the new stuff could well be even spookier, and certainly dubbier, than last year's atmospheric EP, With No Certainty.


She mentions Jamie Woon, the hotly-tipped R&B/dubstep singer. “I liked the ‘Night Air’ single,” she says, “But the album isn’t as good as I thought it’d be. It sounds a bit like it’s been attacked by record label producers or something.”
Recently, they’ve been advertising for additional musicians to beef up their live act. “We want to come back and show that we’ve moved up a step,” explains. “So we want to define our sound and define our live set. Visually we’re quite static, I think – we wanted something more energetic, so we’re looking at drummers at the moment.

There's A War by Victoria & Jacob
“It’s difficult to get a balance between what you’re recording and what you’re playing live – with only two people, you can only do a certain amount. But now when we’re producing, we’re using all the equipment that we use live to produce so it’s all easier, because we’re just doing what we do in the studio." In other words, they're trying to bring the live sound as close to the studio sound without losing any spontaneity.
“There is some [post-production on computers]," she concedes, "but maybe we’ll use it as a loop – we can only play so much. Some bands just play over the top of recordings of themselves.”
Yet, having waved the flag of electronic music for the duration of the interview, briefly lets slip her folk roots. “That’s why it would always be nice to have a drummer," she laments. “The sounds that are coming out – you can actually see someone playing it.”
Victoria & Jacob will be playing The Old Blue Last in London on 20th June, and make sure to check out their official website for further upcoming gig announcements. Oh, and their lastest EP, With No Certainty, is on sale for a bargain £2.37.
Posted by elliot

Email ThisBlogThis!Share to TwitterShare to FacebookShare to Pinterest
Labels: interview, victoria and jacob