So, hopefully you've read part one of my journey into the endless abyss of Radio 1, in which I detailed the songs being repeatedly played which have been making me tear my luscious Quiff-locks out over the past two weeks. You might be thinking, he sounds like a right curmudgeonly bastard, and indeed I probably did, raging against all these hippin' hoppin' club noises that the kids listen to nowadays. Well, luckily the rant side of my Radio 1 tale has been fully told, and part two will consist of all the (surprisingly) good songs that are on the BBC playlist. 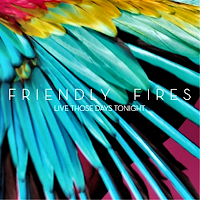 Friendly Fires - 'Live Those Days Tonight'
An absolute cracker of a comeback single from Friendly Fires here, 'Live Those Days Tonight' is an incredible vibrant tune packed with exciting percussion, a hip-shaking beat and with generally just a hell of a lot going on. Packed underneath the gleaming production lies a deceptively simple tune that lingers in the head, like 'Jump In The Pool' hyper on cherryade. There's an extremely appropriate repeated phrase of "Don't hold back" - Friendly Fires certainly aren't. New album Pala (which has a brilliant cover) suddenly just became a very exciting prospect indeed.

Justice - 'Civilization'
Sacré blue! Justice sont de retour avec un single fantastique, 'Civilization'. Ah, GCSE French, you still serve me well. Luckily, Justice also speak the universal language of DANCE music, spelled 'D.A.N.C.E', as the band have already taught us well. Swap verbs and nouns for bleeping electronics, adjectives for overdriven synths, and punctuation for thumping drums and you're halfway there. To be honest, 'Civilization' isn't a particularly big departure for the bands - it's 100% danceable, there's a crazily catchy chorus, and it's devastatingly cool (in those opening few seconds, you know shit's going down). That's not to say it's predictable, just predictably ace. This is sure to be the dance tune of the summer, and its increasing coverage on Radio 1 is more than welcome.

Fleet Foxes - 'Battery Kinzie'
Yet another comeback song - this second single from the upcoming Fleet Foxes album Helplessness Blues is an absolute beaut, and it's well on its way to becoming one of my best tracks of the year already. This was Fearne Cotton's Record of the Week the other week (she may seem inept, but she occasionally has alright taste in music if I'm completely honest, apart from her dire choice this week of that mind-bogglingly awful All Time Low single), and it's simply gorgeous, and a wonderful progression from the debut. This tune sees Fleet Foxes sound even more like Simon & Garfunkel than ever, which is no bad thing, and there's a wonderful blurring of wintery bluster and pastel-shaded summer melancholy on the track, which just gets better with every listen - if you haven't heard it yet, click the soundcloud player below RIGHT NOW.

Fleet Foxes - Battery Kinzie by FBi Radio
p.s That link to the All Time Low single 'I Feel Like Dancing' contains the brilliantly crap lyrics for you to sing along to at home - all together now, "Everybody getting kinda crunk/I think some dude just grabbed my junk..."

Aloe Blacc - 'I Need A Dollar'
Some wonderful, fresh upcoming talent here, Aloe Blacc is now making big waves on Radio 1 with his fantastic single 'I Need A Dollar', a slice of old-school soul/R'n'B at its best. It's incredibly smooth, with silky vocals, classy tinkled ivories, and a wonderfully classic style, whilst the excellent lyrics are both relevant to the current economic situation and also fit within the tradition of blues and soul music. It's a tune that should dominate the summer, and that's well worth both your time and your hard-earned dollar.

Aloe Blacc - I Need A Dollar by stonesthrow

Nero - 'Guilt'
Now, this following statement may come as a bit of a shock to many of you: I am not, I must admit, an expert when it comes to the genre of dubstep. There, I said it. I usually hate the in-your-face room-shaking type of dubstep, preferring the chilled-out 3am post-dupsteb (what a ridiculous but convenient label) stylings of James Blake and (at times) Jamie Woon, but I must confess that whever this comes on while I'm at work I can't help but perk up a bit, 'cos the bit where the bass goes 'wub wub wub' is pretty cool. Now, if I heard it in a club, I would probably be surrounded by a load of knobs going "mad for it, yeah?", but while I'm on my own, this is an honestly 'Guilt'-y pleasure (ba dum-tisch).
Nero - Guilt by jonathan90

Yuck - 'Get Away'
Some great '90s-style fuzzy grunge pop courtesy of Yuck, highly reminiscent of early Ash. There's a wonderful sense of nostalgia to the track, with a catchy and simple set of four chords tumbling out of an amp that sounds like it was created way back in the jurassic era. The nasal vocals and squealing, out-of-tune solos add to the fun and reckless youthful abandon. Makes me want to grab a skateboard and try to be 15 years old again for three minutes, before I realise that I'm still at work and LMFAO has come on for the twentieth play of the day.

Get Away by Yuck

Other top tunes:
Sleigh Bells - 'Tell 'Em': The first track from my favourite album of last year. Noisy, abrasive and just flipping awesome. Gotta turn it up when this comes on.
Foo Fighters - 'Rope': Not one of the highlights from the ace new album, but it's certainly grown on me, and makes for a nice break from Jessie J and Wretch 32.
The Strokes - 'Under Cover Of Darkness': Still not bored of this - as soon as that unmistakable Strokes-y guitar intro comes in, the feet start moving and I can't help but grin like a kid who's been given a nutella and peanut butter sandwich. Heck, in this song even the chorus has a separate chorus.
Jamie Woon  - 'Lady Luck': Another grower - wasn't sure about this Woon track at first, but it's a great song that's on the poppier side of the album material .
Dionne Bromfield - 'Yeah Right': Fun soul-pop tune becoming slightly in danger of being overplayed, from a terrifyingly confident 15-year-old.
________________________________________________________________

So there you have it - I'm not always really grumpy, and Radio 1 isn't always awful. To tell the truth, many of these songs are played overall probably as much as the ones I listed back in part one. Radio 1 seems to get a bad rap - it may not offer massive variety or loads of interesting but obscure artists, but if that's what you're wanting then BBC 6Music is right there waiting for you on DAB. Sure I'd take that over Radio 1 any day, but when push comes to shove, I guess Radio 1 ain't that bad after all really. Unless it's playing LMFAO, in which case shut it down.