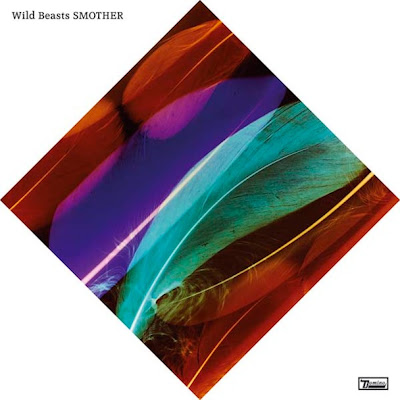 So, we're a bit late with getting a review of this one. It may have come out a few weeks ago, but having been under strict library confinement I've had very little chance to write as many blog posts as I would have liked - however, just like the rest of the world, I've been pretty wowed by Smother, the last album from Wild Beasts, which became an integral part of the soundtrack to my essay writing nightmare.

The Leeds music scene is, frankly, getting a bit ridiculous now. Between Pulled Apart By Horses, Dinosaur Pile-Up and Sky Larkin, they have grunge, pounding riffs, and super-melodic guitar-pop covered, with a formidable live reputation to boot. Wild Beasts, whose second album Two Dancers garnered considerable acclaim in 2009, add yet another ridiculously talented string to the Leeds music bow with their genre-defying mix of pop, alt-rock and operatics, and with Smother they've yet again created an extraordinary body of music.

In a few years time, 2011 may be viewed in retrospect as the year that pop music reclaimed the art of silence. Take, for instance, James Blake's debut - the intricacy and precision of the production ensuring that silence becomes part of the music, with the sparsity allowing every thrum of bass to resonate, every beat to plummet, and the vocals to glide serenely across the epic sonic landscape. See also tracks such as 'Night Air' and 'Spirals' from Jamie Woon's debut Mirrorwriting for a masterclass in the application of atmospheric stillness. To a certain extent, Smother follows a similar ethos, taking pleasure in moments of tranquility and subtlety.

This isn't to suggest that Wild Beasts have gone all post-dubstep on Smother, although there's certainly a throbbing bassline at the core of 'Albatross'. Rather, they have simply mastered the art of atmosphere - from the pulsing synth intro to opener 'Lion's Share', Smother is an absolutely captivating listen. Hayden Thorpe's trademark falsetto is stunning as usual, both placid and unsettling as it floats above the woozy electronics. Most astounding is the band's use of rhythm and percussion here - take tracks such as 'Plaything' which innovatively injects incredible resonance and dynamics into a military beat, or the gorgeous, sultry swagger of 'Deeper' which really has to be heard to be believed.

Despite its sophisticated-sounding exterior, on the inside Smother is a brilliantly smutty album, full of lyrics that'd make your mother blush. As Thorpe trills on 'Bed of Nails', "Our love/Frankenstein in nature and design/Like the Shelleys on their very first time/When our bodies become electrified/Together we bring this creature alive/It's alive! It's alive! It's alive!", both the band's literary aspirations and their mastery of eccentric seduction is brought to the fore. When they aren't being discreetly filthy, Wild Beasts display their darkness, from the Coleridge-referencing gloom of 'Albatross', or the haunting, gothic melodrama of 'Invisible'. The proficiency of their lyricism just adds another expansive dimension to an already stunning, complex work.

Yet for all Smother's intellect, it's surprisingly accessible. Its intelligence is never alienating or condescending, and despite being predominantly atmospheric, it's an album which never bores or becomes pretentious. In fact, one of Smother's greatest strengths is that it never overtly flaunts its brilliance - for all the dramatics, Wild Beasts never allow their eccentricities to overwhelm. They've simply produced an astonishingly consistent collection of tracks that bristle with melody, emotional intensity and dark magnetism, and it's bound to appear in many critics best-of lists come December.


Smother is out now - buy the CD here, or get the MP3 download at 7Digital for £4 here, bargain! Also, be sure to check the band out on tour, as they're incredible live. Dates are here on their official website.
Posted by ben