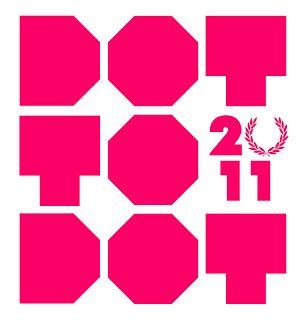 It seems that nowadays most cities have their own one-day festivals, doesn't it? Well, that's because many of them do, but  few are usually as talked about as the Nottingham-bred 'Dot To Dot', which, since 2005, has gradually spread its wings out towards Bristol, Manchester, and briefly in 2008 to London for 'Hox To Dot'. The all-dayer's renown is well-earned - just see the lineups of previous years, featuring the likes of Klaxons, The Horrors, Foals, Late Of The Pier, Sky Larkin, Laura Marling, Santogold... I could go on. So I will: Friendly Fires (whose latest album is sure to top the charts this week, it's a little bit brilliant), Fight Like Apes, Dinosaur Pile-Up, Titus Andronicus... the list goes on and on. Every year, the festival strikes a perfect balance by managing to assemble a line-up which both appeases a mainstream audience with big names at a fraction of the weekend-long summer music fest price, as well as slipping in a fair few less well-known but equally bloody brilliant acts. Rather excitingly, this year's Dot To Dot is rapidly approaching, taking place between the 28th and 30th of May, and in terms of lineup quality, it's another belter. In anticipation of what is sure to be one of the best weekends of the year for live music, Elliot and myself give our rundown of the acts we're most excited about seeing.

Dananananaykroyd
No messing about here - Dot To Dot have secured one of the very best bands I've ever seen live. If you've never seen Dananananaykroyd's hyperkinetic, glorious, self-professed fight pop/party-core on stage, then be sure to make these Scots one of your top priorities. There are few bands out there at the moment who are as thrilling, but most importantly as much sheer, joyous fun to watch than the 'Kroyd. Expect singers Calum and John Baillie Jr. to be giving you high-fives in the crowd within minutes, and be prepared for one of the best parties you've ever been to.

Notable tunes: The whole of Hey Everyone! is incredible, but check out 'Black Wax' / 'Watch This!' / 'Totally Bone' / 'Pink Sabbath' / 'Some Dresses'... oh, the whole bloody thing! And new single 'Muscle Memory' too...
-Ben


Totally Enormous Extinct Dinosaurs
Along with Dananananaykroyd, these guys have definitely one of the best band names on the line-up, and anyone who heard our Quiff Pro 'Fro radio show on Friday night will have heard us give 'Garden' a spin. TEED play miserable yet very danceable electronica, with a few dubsteppy beats thrown in for good measure, and have made a considerable impact with tunes like 'Household Goods' and the aforementioned 'Garden'. They also apparently have a fondness for large, silly hats, and have attracted a fan in Annie Mac - what else could you need?

The Joy Formidable
Anyone who likes their rock music loud and grungy probably already knows about The Joy Formidable. Their debut album The Big Roar is sure to feature in a few critics' best-of lists come the end of the year, and has won over audiences across the UK for good reason - there are brilliant melodies behind the growling, swelling guitars, and in Ritzy Bryan they have a magnetic frontwoman who, erm... whirls round the stage lots and has been known to smash her guitar just one song into a set. It's sure to be one of the loudest and heaviest sets of the day - check it out if that's your thing.


The Joy Formidable - Austere by rslblog.com

Cults
Here's a name that, if you don't know now, you'll definitely know in a few months time. These massively hyped but reluctant superstars-to-be, channel classic motown R'n'B into spooky indie music, with fashionable boy/girl vocals. Having signed to Lily Allen's record label (not a particularly obvious match), they're due to launch a debut in the next few months, making this a chance to see them before they get big, and so you can feel all smug and superior about it.

Notable tunes: ‘Abducted’ (great organ and glockenspiel use) / ‘You Know What I Mean’ (wait for the build up into a humongous, climactic finale!)
-Elliot


Other acts to catch on the day:

Stagecoach - I've written about these guys loads ('Introducing...' piece and new single review), and can't wait to see them live. 'Map to the Freezer' is bound to be absolutely huge!

The Naked And Famous - Elliot raved about these guys in his live review, with a moodier and more intense live sound than on record.

Guillemots - The former Mercury-nominees released a new album this year to minimal fuss, but Fyfe Dangerfield's songwriting talents are impossible to doubt.

Benjamin Francis Leftwich - Great to see this guy doing so well, and expect big things from him this summer. He's great live and a very nice guy - expect a brilliantly chilled and atmospheric set.


Dot To Dot takes place in Bristol on May 28th, in Nottingham on May 29th, and in Manchester on May 30th. For more details, tickets and line-up announcements check out the official site here.
Posted by ben