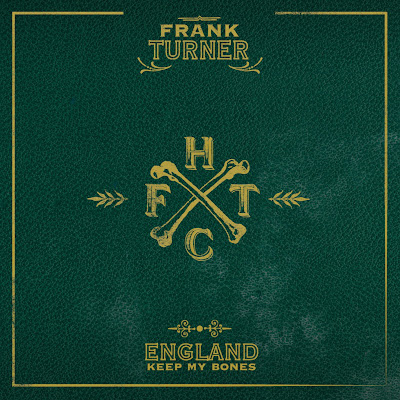 If I’m completely honest, I’d gone off Frank Turner a little bit last year. He’d started to gain more mainstream attention with the likes of ‘The Road’, and his army of dedicated fans was constantly multiplying - all the signs seemed good. Except, 2009’s Poety Of The Deed was a bit of an underwhelming album overall; as covered in this piece I wrote a few weeks ago, as much as I love Frank and he has some wonderful, touching, funny and poignant tunes, he’s never really delivered one consistently great album. Poetry Of The Deed continued this tradition, yet the knockout tracks seemed fewer and further between. With that in mind, I ask you to cast those lacklustre memories aside and turn your attention to new album England Keep My Bones. With all honesty, I can attest that it is Frank’s most consistently brilliant album yet, and the closest he’s yet come to writing his masterpiece.

As you might expect from the album title, England Keep My Bones is an album steeped in heritage: this record is Frank’s view and understanding of his homeland, his origins, the ever-expanding history of the country and his place within it. Turner’s England is one flowing with life, a living, breathing organism with rivers and roads for veins, earth for flesh and, most importantly, a soul. The people who inhabit England are extensions of the motherland, each linked by their nationality, and rendered immortal by the marks and memories they leave ingrained upon both one another and the land.

Frank Turner - I Am Disappeared by Epitaph Records

‘One Foot Before The Other’ sees Turner ponder cremation upon the inevitability of death, so that he can then spread himself throughout the population, and eventually to the land and sea, whilst the gorgeous ‘Rivers’, surely one of his most accomplished songs, closes with his heart-rending declaration that “When I die I long to be/Buried out at English sea/So all that then remains of me will lap against there shores/Until England is no more”. These lyrical motifs tie the whole album together with a sense of completion that Turner’s never before managed; where other albums have had brilliant standalone songs, England Keep My Bones feel wonderfully organic and self-contained, completely satisfying as a whole.

Musically, this is the biggest-sounding Frank album to date, with backing band The Sleeping Souls featuring on the majority of tracks. On previous albums, the best moments always came with just Frank and his guitar - particularly, much of Poetry Of The Deed became stodgy and dull, however it’s as if Turner has since realised how to use the band to accentuate the life of the songs instead of drown them out. First single ‘Peggy Sang The Blues’, the previously-released ‘I Still Believe’ (which sounds much better in the context of the album) and ‘If Ever I Stray’ are all brimming with uplifting arrangements that raise the songs into joyous new heights. ‘If Ever I Stray’ in particular really stands out with a breathless, jubilant chorus.

Whilst the band appears much more frequently on England Keep My Bones, the album also veers in the complete opposite direction for fully a capella track ‘English Curse’. Written and composed by Turner himself, it’s a very traditional-sounding English folk song with historical roots in a legendary curse upon William the Conqueror, from “many years back when these old oaks were young”. Entirely convincing as a time-honoured relic of forest folklore, it’s a remarkably accomplished piece of songwriting, and a real jaw-dropper on first listen.

As ever, one of the most striking aspects of Frank’s music is the passion and intensity he imbues it with, even more apparent in his live performances. In his existential quest in England Keep My Bones, he sounds yet more impassioned, searching spiritedly for answers and notions of nationality with dramatic fervour. See for instance opener ‘Eulogy’, with the oddly affecting lyric “Not everyone grows up to be an astronaut” - this is as much an album of Frank coming to terms with who he has become as well as where he comes from. When the band crashes in and Turner yells “On the day I die/I’ll say ‘at least I fucking tried’/That’s the only Eulogy I need”, it immediately commences the album on an emotional high. ‘One Foot Before The Other’ is also notably Frank’s heaviest song since his Million Dead days, though it doesn’t feel too out of place here.

Daring closing track ‘Glory Hallelujah’ is full of British irony, in what can only be described as an atheist hymn. Getting a gospel choir to repeatedly sing “There is no God” is initially jarring, and as offensive as people may find the chorus (Frank apologises to his religious friends and his mother in the album liner notes), the overall message that people need to take account for their actions and aid and inspire one another is a display of the honesty that can always been found in Turner’s songs. It’s also brilliantly composed, with some great vocal harmonies, jazzy pianos and optimistic organs.

Though ‘Long Live The Queen’ and ‘The Ballad Of Me And My Friends’ might still remain as Frank Turner’s best tunes, England Keep My Bones finally provides the accomplished album that we’ve always known he’s been capable of. With a brilliant, personal concept, the album provides loads of Turner’s best, most passionate tunes yet; the way he writes about his own England brings to mind Springsteen’s tales of working class New Jersey, personal and political struggle mixing with the pride and identity inherent in a homeland. The Sleeping Souls are used to full effect, and for once the songs don’t pay the price. If you’re a fan, this is an essential listen; if you’ve always given him a miss, there might just be enough to convert you here. Finally, Frank Turner has made an album which will really creep into your bones. Good luck trying to shake it.

Buy the gorgeous deluxe edition CD of England Keep My Bones here on Amazon. The (fake) leather-bound packaging is lovely, and you'll need all the lyrics for his live shows, or you'll be the only one not singing along...
Posted by ben