Nicola Roberts And The Impact Of ‘Pon De Floor’

It’s been a while since I last wrote about commercial pop music, and the first solo release from Nicola Roberts (the “shy ginger one” of Girls Aloud), released today, definitely deserves a few column inches. It’s a beauty, written and produced by two of the best pop producers around right now.

‘Beat of My Drum’ is more than just a great song, however: it’s indicative of where pop music is going right now. The two key influences are undoubtedly Justice’s ‘D.A.N.C.E.’ and Major Lazer’s ‘Pon De Floor’, both unashamedly fun tracks. But of the two it’s ‘Pon De Floor’ that could be considered the most important and influential song released in the last two years.

Odd perhaps, considering how bizarre the song actually is. What began as a tribute to Jamaican dancehall reggae has somehow, since its release back in August 2009, managed to conquer pop music. No, really - If Roberts’ near-sampling of the song isn’t enough proof of this, consider the new Beyonce single, ‘Run The World (Girls)’, essentially ‘Pon De Floor’ with entirely unnecessary vocals slathered over the top.

These are more than just influences, however: Roberts’ song is produced by one half of Major Lazer, Diplo, while Beyonce’s is entirely produced by both Diplo and Switch. Sure, you might say, of course a song produced by Diplo and/or Switch is going to sound like Major Lazer.

Yet the fact that these blockbuster releases are not only being trusted by the pair but purposefully attempting to sound as close to ‘Pon De Floor’ as possible is surely proof of its impact.

Big choruses have long been a key component when it comes to pop music, but these bizarre breakdowns are a new phenomenon and it’s the relatively underground ‘Pon De Floor’ that began this craze. Though it may initially have untroubled the charts, its cult status has grown to the point where it’s still being played in clubs two years on from its first release.

And thank goodness, because it’s a song designed for clubs - music for people to dance manically to in dark, crowded rooms. More so than ever before, the boundaries between pop music and dance music are being blurred without losing the essential qualities of both - an anti-intellectual mix of fun and sex that has enthralled the general public but infuriates music critic (and snobs) like ourselves.

One thing I will admit that irritates me though is the way in which this chart-dominating style of music clogs up radio stations; at seven in the morning, the last thing I want to hear is Dev singing about getting “scissored”. 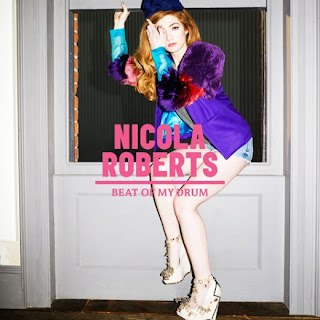 So anyway, back to Roberts’ song. What’s interesting about ‘Beat of My Drum’ is the additional tricks it has up its sleeve: the chorus isn’t a big synth-fest like so much of contemporary music, but instead a layered shout of “EL! OH! VEE! EE!” - cutesy and kitsch, in the vein of hipster favourites Feist and Lenka and of course Justice’s own ‘D.A.N.C.E.’.

It’s a brilliant choice, distinguishing itself from the massive egos seen in most of these works and building on Roberts’ existing public image as the innocent and awkward member of Girls Aloud.

Compare it to the silly and melodramatic output of fellow Girls Aloud breakout Cherl Cole and the track’s brilliance becomes even clearer. Fashionable, fun, knowing: are not words that can be used to describe Cole’s singles (especially the dreary ‘Promise This’ - who wants to hear pop music about the inevitability of death?), but definitely apply to Roberts’ track.

So I wish all the best to Nicola, or more specifically Diplo and Dimitri Tikovoi, the true brains behind ‘Beat of My Drum’. Not that they need any wishes - this one will surely go on to sell zillions, and hopefully influence much more pop music with such a finely-honed sense of fun.