So, er, I'm going to blame the lack of blogging around here on the hangover resulting from our week-long birthday celebrations. To kick things back off for our second year, here's a few awesome songs and albums I've been enjoying recently.

Computer Magic has been putting out lots of free music over the last year or so, and they've been tasty little slices of Casio keyboard synth-pop. But for her first physical record, Danz has teamed up with producer Lewis Pesacov to re-record a few of her older songs with acoustic drums and and real guitars. To describe this as an 'HD update' would be inaccurate: the songs truly come alive with fuller arrangements, with the rougher parts of Danz's distinctive voice ironed out.

The only weird bit is the choice of tunes: why these over the brilliant 'Hiding From Our Time or 'Grand Central'? Regardless, it's still definitely worth the £2.76 Amazon.co.uk are charging for it - or if you like vinyl (and international shipping costs) there's a white 12" version too.

Another blonde electronica singer-songwriter - and one you're more likely to have heard of - is Ellie Goulding, who seems to have hidden herself in a bunker deep beneath the Earth's surface since selling out in that John Lewis advert last Christmas. Regardless of what you think of her Elton John cover, there's no denying the appeal of some of her own tracks: in particular, this foot-stomping live version of 'Lights' from last year.

I've never listened to the Dresden Dolls, but after being exposed to a bit of lead singer Amanda Palmer's solo album Who Killed Amanda Palmer I felt compelled to download it in full - particularly since it's available for pay-what-you-like on her website. Performed mostly on piano, the album is as packed full of feminist themes and oddball characters as you'd expect from one half of the self-labelled "Brechtian punk cabaret" duo. The album's highlight is 'Leeds United', an ode to singletons with a brilliantly crescendoing brass section.

A music blogger favourite here - in fact, I found it while browsing the Hype Machine's most-blogged tracks. The Glitch Mob deal in funky, distorted, atmospheric anti-dance music with an epic sound. Their tracks are all essentially the same, yes, but they're still plenty of fun.

We've already written extensively about Radiohead's latest album, but this live session - broadcast on a Spanish TV station and quickly spread around the net - is the first chance to hear high-quality live recordings of their latest work. Additionally, there are a couple of as-yet-unreleased songs: 'Staircase', which the band released officially onto YouTube a few back, and 'The Daily Mail', which builds to a thrilling 'You And Whose Army?'-style creschendo. There's bootlegs - both video and audio - popping up and down all over the web at the moment, but here's the standout tracks from the session. 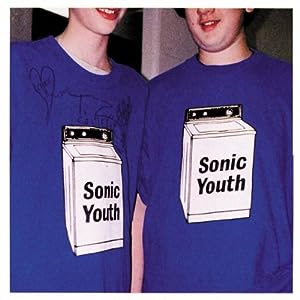 And last but not least: whenever the weather gets unbearably hot (not so common here in London), I get a weird craving for Sonic Youth. No idea why. Anyway, a couple of weeks ago we had a very humid weekend - but instead of putting on Daydream Nation again, I felt like listening to something new. On the recommendation of a friend I checked out the brilliantly-titled Washing Machine. Unlike the aggressive and semi-commercial thrashings of their better-known tracks, Washing Machine is calm, meditative, almost sleepy; perfect for hot, lazy summer days. The title track may be almost ten minutes long, but definitely worth it.