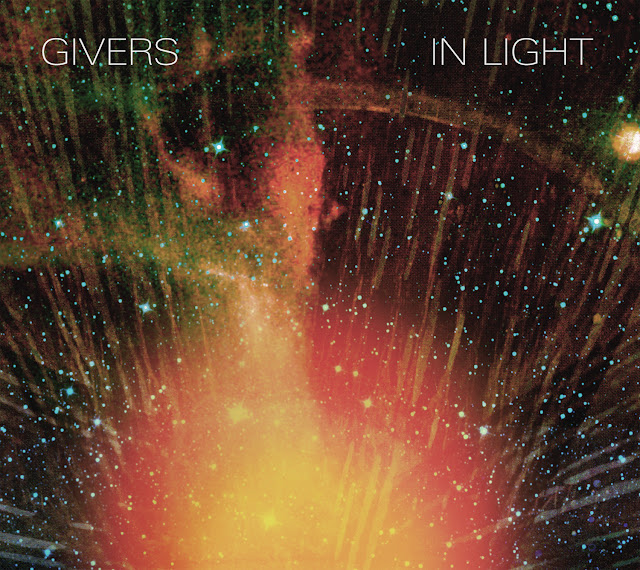 Buying an album on the strength of just one single can be a risky business. I, like many of you I'm sure, have been burned before after having a particularly awesome tune stuck in my head before finding out that the album is, well, just not that special (*cough* Funeral Party *cough*). Givers' debut single is the irrepressibly catchy 'Up Up Up', a bouncing summer anthem which borrows the twiddly Afro guitars of Vampire Weekend, the lo-fi blown-speakers effect of Sleigh Bells and the cutesy boy/girl vocals of Cults (as well as prominent glockenspiel) blending them into a buoyant pop song which isn't afraid to delve into fuzzy noise-pop in its closing minute. When I got hold of In Light, I was expecting ten three-minute pop nuggets, of which 'Up Up Up' would probably be the obvious highlight as 'the one with the slightly spikier edges'.

"Up Up Up" by GIVERS by Glassnotemusic

In Light isn't a collection of three-minute pop nuggets. And 'Up Up Up' isn't the spiky one. In fact, it's probably the most 'obvious' track of the ten, considering its simple chorus-verse-chorus etc. formula. But what unfurls over the course of 50 minutes (!) in In Light is infinitely more exciting, surprising and downright delightful than any of my expectations.

Take, for instance, 'Meantime', opening with a reverb-drenched guitar riff, some lovely vocal harmonies and a mid-tempo beat. Thirty seconds in, a slightly lurching harder-edged melody takes over, and just past the minute-mark you're into full-on surf-calypso territory. It's as thrillingly melodic as it is disorientating. Switching deftly between time signatures and styles with no regard for the conventional structure that 'Up Up Up' followed, 'Meantime' is also one of the most impossibly upbeat, joyous songs of the year, particularly in its confounding final minutes. That it all coheres and sounds quite as brilliant as it does is revelatory.


The rest of the album follows suit; the confidence as Givers transcend genres belies that this is only their debut. 'Saw You First' begins with a folky Americana feel before shifting into more structured electronics, like if Rusted Root's 'Send Me On My Way' found itself gatecrashed by Battles. Really. In fact, you'd be hard-pressed to find a regular chorus again until the anthemic 'Noche Nada' five tracks in.

Ironically, one of In Light's poppiest tracks is actually one of the best, as well as being the shortest (though still over four minutes long) - the brilliantly named 'Ceiling Of Plankton'. Through its intensely catchy verse and glowing, heartfelt chorus, it feels like a song from the second album many wish MGMT had made (whateva h8erz, Congratulations ruled). That is, until it dives headfirst into a jazzy flute freakout with a cacophony of rapid-fire drums and handclaps. The final minute is an exercise in blowing minds with the pure power of a bassline; think the 'You Can Call Me Al' solo lasting sixty seconds and you're almost there.


I'm reluctant to go into much more detail on the album itself - the twists and turns that In Light undergoes are as densely packed as a thriller, and I'd hate to ruin the plot. In some ways, the first few listens of the album are the best, where the line between songs goes unnoticed, but you're continually struck by segments of blazingly creative melody. Weaving an adventurous thread through aspects of experimental pop, afro, funk, electronics and even math-rock, In Light is a thrillingly diverse listen with a pace that very rarely slows. Where you imagine Battles spent their youth in front of dimly-lit PC monitor pixels, it seems Givers spent theirs staring directly into the sun. In Light is without a doubt one of the best albums of the year so far, and certainly one of the brightest and most richly melodic. File this one under awesome surprises.

In Light is released in the UK on October 10th, and it's well worth a pre-order. Find out more about Givers at their official website.
Posted by ben