A second look at Florence + The Machine's Lungs

True story: I wrote this before the release of new single 'What the Water Gave Me' - but it's perfect timing anyway I guess.

Florence + The Machine burst onto the indie scene in 2008 with ‘Kiss With A Fist’, a three-chord ode to a violent love affair. Yet on the basis of this modest single, few could have predicted the rapid success of the band’s debut album Lungs, which spawned several bestselling singles, Glee covers and a collaboration with Dizzee Rascal. How did such a radically individual album go on to rule a chart otherwise dominated by oversexualised electro-dance divas like Rhianna, Katy Perry and Kesha?

The boom in solo female artists that began halfway through the last decade spun out some truly successful and, in some cases, talented acts. Yet an early emphasis on indie rock and singer-songwriters like KT Tunstall was replaced by Lady Gaga's prevailing electro-pop, a style which, Adele excepted, still maintains a vice-like grip on the public consciousness. Florence + The Machine's debut album sticks out like a sore thumb, its use of (mostly) acoustic instruments and blustering, non-autotuned vocals going against all current mainstream trends.

To describe Lungs as a folk record would be misleading; yet, with an emphasis on the band's harp and Florence's strong voice, it sounds almost rustic. These are great songs, too - gloomy yet singable, with massive choruses derived from the darkest of feelings. 'My Boy Builds Coffins' is spooky and ethereal; 'Hurricane Drunk' is a clever take on the old theme of 'drinking the pain away', and 'Dog Days Are Over' is a joyous yet violent song of sheer celebration. Sure, the closing cover of 'You've Got The Love' may be a popstastic, neutered version of a dance classic, but in the context of the album it makes for a pleasant palate-cleanser after the gloom that precedes it. 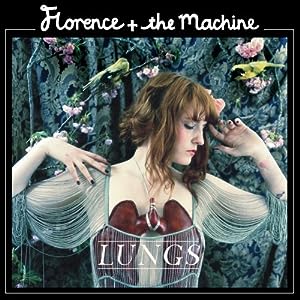 It's not just the music: Florence's lyrics are mostly about her own mortality, with songs about her heart as both another bodily organ and a mysterious supernatural force in its own right. In the euphoric 'Rabbit Heart', Welch sings of herself as the "rabbit hearted girl… shedding her skin", natural imagery contrasted with pseudo-spiritual ideas of "offerings" and "sacrifices". I would go as far as to say - and stop me now if this is getting a bit too A-level English for you - that parallels could be drawn to Lyrical Ballads and other works of the Romantics in the presentation of the natural world as some kind of otherworldly, supernatural force.

Regardless of how you interpret it, as an album Lungs is a pleasant listen with plenty of variety and some very strong songs. But what's truly remarkable about Lungs is the manner in which it took off after release. In the same way The xx's debut album was pounced upon by serious documentaries as a Serious Soundtrack, Lungs has become the de facto standard for inoffensive reality shows and daytime trailers. 'Dog Days Are Over', 'Howl' and of course 'You've Got The Love' are now inescapable TV clichés. The band's mainstream success was cemented with a TV-friendly duet with Dizzee Rascal at the Brit awards and - shudder - a Glee cover.

How did an album that at one point was destined for underground, if not cult, recognition, do so well? Its glossy production and position on a major-label go only so far. To see the album from a wider perspective of society at large, Lungs was released as the recession began to ratchet up, but the popular environmental movement was still in fashion - perhaps explaining the success of an album that emphasises our own fragility as humans and our powerlessness in the face of nature.

The question is, will the follow-up - due in November - still find an audience among a public who always preferred the easy-listening bits to the truly dark and moody highlights? And will the band opt to charm the charts once again, or revert back to the underground (who may or may not be interested now the band has 'sold out')? Here's hoping Florence + The Machine can find a way to capture the public's imagination once again without compromising any of their vision.
Posted by elliot

Email ThisBlogThis!Share to TwitterShare to FacebookShare to Pinterest
Labels: florence and the machine