Everyone loves a good rant, don't they? A chance to vent, get all your frustrations out. Especially on the internet, where you can shout 'screw you!' at anything or anyone into the overcrowded din before it disappears into the world wide void forever.

In fact, while we're here, I might take the chance to do a few myself: 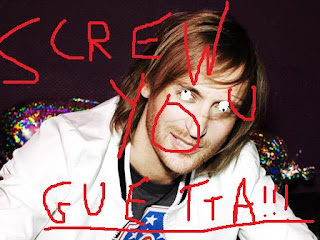 Screw you David Guetta for releasing the same shit song hundreds of times without anyone noticing and making tonnes of cash!
Screw you Michael Bay for wasting £5 and two and a half of my life with Transformers: Revenge of the Fallen!
Screw you Michael Bay again for making me think Transformers: Dark of the Moon would be any better! It was equally shit!
Screw you Blink-182 for a thoroughly mediocre return!
Screw you Facebook for changing your layout into an even more inscrutable version every few weeks!

That feels better now. Except for the fact that none of what I've said is going to change anything.

Another person who it seems likes to have a good old inconsequential yell at the world is Nicola Roberts. Transforming from 'The Ginger One in Girls Aloud' to 'The Ginger One from Girls Aloud Who Writes Good Solo Pop Songs', Nicola's shy-and-awkward-but-quite-sweet-and-feisty persona may have won over fans on the internet ('Beat Of My Drum' was a great first single), she didn't really make much of an impact on the charts. It remains to be seen how well her debut album Cinderella's Eyes (released today) does in the charts come Sunday, but what's certain is that there's actually some really great pop songs on there.


"I'm scared to think about the Devil 'case he takes my soul"
The one that immediately leaps out is 'i', a big old moan which sees Roberts pretty much list a load of stuff that really annoys or scares her. Despite the odd dodgy couplet (and a bit that sounds like she says 'I don't like Batman', which worried me for a while), it actually makes for a pretty successful set of honest lyrics which never come across as too much of a try-hard attempt to be all 'dark' and 'mysterious'. After years of being 'The Ginger One in Girls Aloud', it's clear that she's got plenty of pent-up frustrations and a desire to speak for herself away from the safe and restrained world of PR and marketing people.

"I don’t like that you won’t let me speak controversially/Because you think that it won’t sit well universally"
Underneath all of the angsty vocals lies a brilliantly doomy funk riff courtesy of Mr. Metronomy himself, Joe Mount. In fact, anyone who's found a lot to love in The English Riviera will probably find much to praise about 'i' - without Roberts' vocals, it would fit fairly easily into Metronomy's latest, with tight drumming, bursts of fuzzed-out synths, a rigid guitar riff and fretboard-wandering bassline.


"I don’t like the people that leave comments on the internet/They preach they’re perfect while they’re killing you with intellect"
'i' is a remarkably assured pop song which will hopefully prove to listeners that Nicola Roberts is a notable musical talent. Give it a listen, and if you're intrigued then go and pick up a copy of Cinderella's Eyes - we should be praising great inventive pop music like this, and the best way to do that is to pay a few quid to the artist and show it's also commercially viable. Screw you David Guetta!

Oh, and check out this live version of the 'i' where Roberts drops an F-bomb!