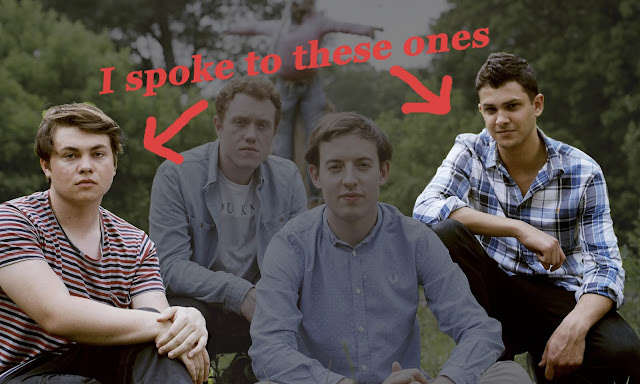 Whilst on their last tour, after the success of excellent third album A Different Kind of Fix, I was given the chance to sit down and chat to bassist Ed Nash and drummer Suren De Saram. Obviously this was a really great opportunity to ask about the new album and tour, but I decided to just ask lots of silly things instead: see below.


You’re given the chance to follow any living band or artist on tour – who would you tour with?
Ed: Weezer would be one of mine. Pinkerton is one of my favourite albums.
Suren: I’d tour with that rap group who were on before us at Leeds festival – Odd Future. They were trying to hit on our guitarist’s girlfriend. They were really nice actually.
Ed: I went up to Hodgy Beats in the morning and he was pretty chilled out. They seemed very nice.


You’re at the zoo and the zookeeper tells you that you can take any animal home with you – which do you choose?
Suren: I’d go for a sea lion. I’d get a tank built in my house for it.
Ed: I’d get a penguin. They can live on land. And they’re quite small and portable.

You’re offered a once-in-a-lifetime trip in a time-travel machine – when and where do you go?
Ed: Can you alter time at all? Or do you go and just observe? You could change everything… I’d go back two thousand and eleven years to December the 25th and see what went down. That would be interesting.
Suren: I’d come back here in like 150 years time and see what had changed.


You open a restaurant after a busy life of recording and touring the band – what sort of food do you serve?
Ed: I’d serve proper English pub food. And I’d call the restaurant Bangers & Nash. That would be good.
Suren: I’d do a nice little Spanish tapas restaurant. Tapas is amazing.


You’re informed that the Queen is coming to your house and you must provide refreshments – what nibbles do you leave on the table?
Ed: I’d make a quiche. That’s my speciality. Probably just a quiche lorraine. Maybe some carrot batons and dip. I’d buy houmous, I think she’d like that.
Suren: I’d get those little bits of salmon on a disc – salmon blinis. I bet she loves that shit.