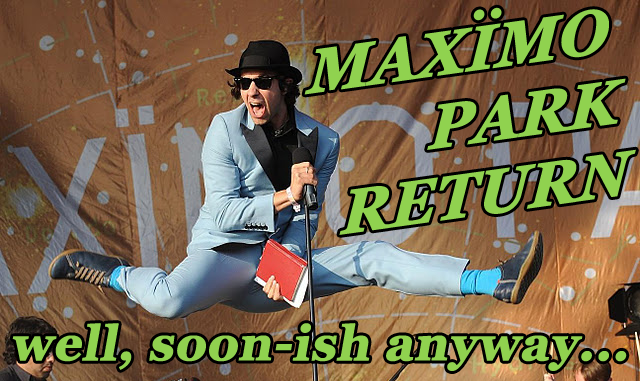 So, Maxïmo Park have been away for a little while, and whilst their third album didn't do huge business, their first two records still stand up as a perfect example of how great some of the indie rock in the mid-'00s actually was. A few weeks ago, myself and the wonderful Chris Scott had the chance to catch up with frontman Paul Smith (the bowler hat guy, not the stripey Nottingham designer), who opened up about the Newcastle music scene, the difficult second album and what the band have been up to following Smith's solo album.

“Overall, the Newcastle scene is more diverse than it used to be, but the music industry is based in the South and record labels don’t want to sign something unless it’s a dead cert. For us, we were signed by an independent record label and we remain true to ourselves in that respect. And when I see bands doing a similar thing to that and don’t conform or try to fit in, it excites me.”

As one of the few surviving bands from last decade’s indie explosion, one could argue that that’s how Maxïmo Park have retained their popularity; from their well-loved 2005 debut A Certain Trigger to 2009’s Quicken The Heart, the band have endured not only due to their top-notch alternative anthems, nor their reputation for high-energy live shows but their streak of independence. Despite their success, the band haven’t flung themselves at major money-spinning labels or decamped to America. In fact, three fifths of Maxïmo Park still remain in Newcastle, the other two heading elsewhere with significant others.

One of the three still hanging around the North East is frontman Paul Smith. Often to be seen down at the Head of Steam clad, of course, in his trademark bowler hat, Smith grew up near Stockton-on-Tees and graduated from Newcastle University. Aside from Paul releasing solo album Margins last year, Maxïmo Park have remained quiet for a little while. Just what exactly have they been up to?

Maximo Park - The Coast Is Always Changing by nathanield

“We’ve had a little time off and all been recharging our batteries. We also kind of reinvigorated our raison d’être in the band, figuring out what we do well, why we’re here, what we want to do, what the people expect us to do and put all that into a pot and see what comes out,” Smith rattles off, barely pausing for breath.

Having rediscovered the band’s focus, fans can rest assured that new material is on the way.

“We’ve been doing a lot of demos in Newcastle – we have a little studio, although I think studio is a little bit posh for what it is!” the frontman reveals. “We recorded demos and some of our B-sides there on the last album. We had a bit of money left from touring, so we recorded a few tracks – the next record is well on its way, and if we can find some more money from somewhere, we’ll record some more in December and January and then that will be that. It’ll be nice to start on the artwork and get on with the other jobs, and hopefully put out a record next year.”


“I look back and I didn’t want to be one of those guys with the Liam Gallagher haircuts, and that’s still the case in many local bands these days”

Returning from their hiatus to play at the BBC Radio 3 Free Thinking Festival, Maxïmo Park found themselves on a bill alongside renowned poet Sean O’Brien and Skellig author David Almond, though Paul is unpretentious about the band’s inclusion on the bill.

“I’m well aware that our music has its limitations – it’s pop music, and the lyrics are lyrics, not poetry, but there are poetic elements to the lyrics, which is something I’d like people to be aware of when they’re listening to the music,” he admits. “It’s in there; that more romantic world view that we share with other more romantic bands. We’re essentially a pop band that play quite aggressively on stage, but there is a more thoughtful aspect to it which will hopefully come out.”

With a reputation for explosive live performances, Maxïmo Park remain a firm favourite on festival billings. Not only do they have a whole roster of crowd-pleasing tunes such as ‘Graffiti’, ‘Apply Some Pressure’ and ‘Books From Boxes’ under their belts, but Paul Smith’s erratic stage presence always makes for a captivating show.

“There’s quite a random factor going on when we’re on stage,” Smith states. “Whether it’s the rubbish I talk between songs, it’s kind of based on spontaneity but the more you play the songs, the more you get into the rhythm of them… I guess it looks like a mixture of professionalism and amateurism, which is probably very accurate!”

"Bands that disappeared after the second album, if you hear their first album again after the hype dies down, you realise that it didn’t display good song writing"

It was partly this live show which garnered attention from further afield than the local scene and made the band stand out from the rest of the indie landfill.

“I look back and I didn’t want to be one of those guys with the Liam Gallagher haircuts, and that’s still the case in many local bands these days,” Paul remembers. “I’d rather not be so superficial as to judge people on the way they look, but you can tell a lot about a band from their press photos and stuff. We always tried to do something a little different within our means – we weren’t dressing up like Kate Bush or Björk though! I think these days the music scene is more diverse, due to the success of bands like ourselves and The Futureheads from the region. It’s shown people they can do it their own way.”

Unlike so many indie bands who achieved similar commercial success around the same time as Maxïmo Park, Smith and co. managed to avoid the dreaded difficult second album syndrome with their 2007 sophomore effort Our Earthly Pleasures. Paul speaks pretty frankly when talking about why so many bands trip up at such a significant juncture.

“I think being good helps – I know that sounds terrible on first listen, but many bands don’t take care about being good first. Those bands that disappeared after the second album, if you hear their first album again after the hype dies down, you realise that it didn’t display good song writing, and we’ve always been based on the songs being good first and foremost,” he openly admits. “I don’t want to sound like the campaign for real rock and authenticity, but our ethos has always been about whether you can play a song on the piano or the acoustic guitar, or if the vocal is strong enough so you can play it a cappella. If those foundational blocks are there, then we’ll move on, if not then the song isn’t there yet.”

Maximo Park - Our Velocity (from Our Earthly Pleasures) by aramis-schultz

Once again, though, partly it’s Maxïmo Park’s independent ethic which has helped them to survive, free from the pressures of major labels to increase sales from record to record.

“I do feel sorry for bands that get dropped after their second album for other reasons; bands that were very good but got in with the wrong labels,” Paul sympathises. “It’s all about making money to large labels. People shouldn’t kid themselves that labels nurture the bands – those are few and far between. It comes down to ‘did it sell as well as the last and if not, let’s move on from them’ and I feel sorry for those bands.”

Particularly on first listen, one of the most distinctive aspects of Maxïmo Park’s sound is Paul Smith’s North East accent, a comforting reminder that the band were never going to be one to forget their roots as soon as they hit the big time.

“I sing as I speak and what I wanted from the band was for it to be honest and emotionally based,” says Smith of his vocal delivery. “Whether the emotion is funny or sad, to take it down to its most basic level it still needs to come from an authentic place, and the best way to do that is to sing how you speak, and for there not to be too much of a barrier between you and words. I didn’t realise I was doing that until our first concert and people said ‘that was a bit weird actually, you sing how you talk’. The longer it went on, every time I met people they mentioned it, so in the end I thought it’s a good thing – its distinctive and works, and not many bands in the North East do that.”

Not only are Maxïmo Park a band here to stay, they’re not leaving their Newcastle roots behind either. With new material well underway and promises that they’ll be “touring on a big level next year”, get ready: Maxïmo Park are about to explode back onto your radar.