Why Visions by Grimes is the best album of 2012 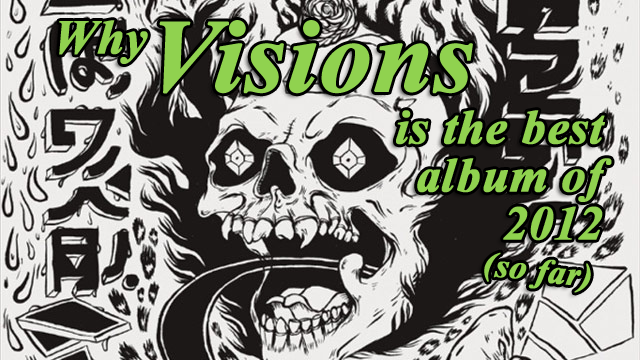 Visions is the first album of 2012 - maybe even of the last twelve months - to make me want to shout about it (or indeed blog about it). It's an album that throws out (most of) the clichés of electronic music and takes stunning risks - not in an overblown, prog rock fashion, but entirely unpretentiously.

There's plenty of lo-fi electronic music about at the moment (mostly of the Washed Out variety), and you could be forgiven for mistaking Grimes for another one of these acts. But thought it may also sound as like  it's been produced on a MacBook, Grimes (the pseudnonym of Claire Boucher) it swaps fashionable fuzzy textures and 80s synths for a piercingly sharp and (ahem) grimy style. Like Crystal Castles, it contrasts angelic voices, beautiful keyboard and harp accompaniment with Skeillex-esque roars and demonic voice modifiers.

In fact Crystal Castles is probably quite a good comparison, except that Grimes swaps its blistering teenage angst for something more meditative and considered - and ultimately, scarier. The songs are too of a high standard, with complex melodies that are somehow catchy despite being impossible to sing along to.

And speaking of singing - the greatest risk taken by Boucher on Visions is with her voice, which switches frequently between a squeaky whispering lisp and an ethereal siren's voice. Both of which are undoubtedly an acquired taste, but believe me, it's worth sticking with.

That said, it's not a perfect album: in particular, the opening and closing tracks are two of the weakest, neither providing a good introduction to the album or providing a satisfying conclusion. In fact, it's an album that works as well on shuffle as it does in order.

I've long thought that the 21st century's singer songwriters won't just be stuck with guitar and piano, repeating the same old sounds as previous generations - no, the future is in exploring the new opportunities increasingly affordable music software can offer. We've had plenty of electronic music, mostly dance, in the past two decades, but solo artists like James Blake and Grimes are producing a new breed of ground-breaking, deeply individual electronic music with emotional depth.