We Need To Talk About Muse 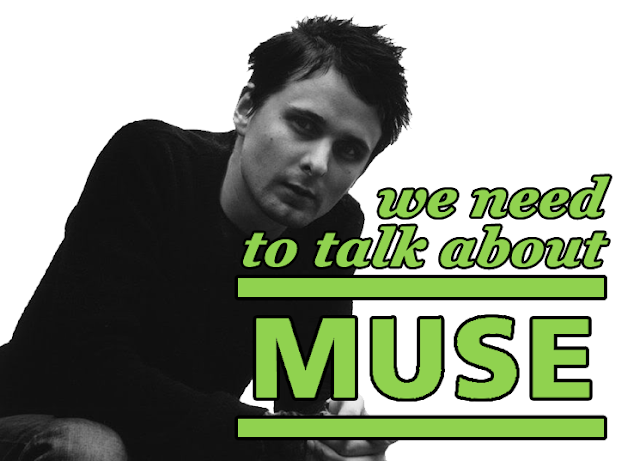 Muse. It's been a while. Three years, in fact, since The Resistance split their fanbase down the middle, managing the impressive task of seeing the band becoming even more a parody of themselves whilst simultaneously taking another step towards being successors of Queen (if Queen ever wrote musical versions of 2001: A Space Odyssey and Nineteen Eighty-Four, that is). Many fans turned away. Easy to see why, really, given the sheer flamboyance on display from the band who once gave us the certainly dramatic but utterly camp-free 'Muscle Museum', 'Bliss' and countless others. The hard edge was replaced by a poppier sheen, though that's not to say it was any more commercial - if anything their ambition was also kicked into almost self-parodic overdrive with a stunning full-blown three-act symphony seeing out the record.

For all that it was an extremely silly and over the top album, there was still something likeable about The Resistance, something that I was willing to defend. Sure, the lyrics had all the metaphorical subtlety of a giant heart-shaped wrecking ball crashing into the Houses of Parliament for all their 'love vs. the establishment' imagery, and the near-plagiarism of Orwell's epic dystopian vision seemed more lazy than anything. The harmonies were sheer glam-rock Freddie Mercury, and the OTT pomp abandoned any sense of cool that the band still held.

But there was something ballsy about its outrageous campness. Many of the songs were firmly rooted in strong pop traditions ('Resistance'), others were almost endearingly batshit ('United States of Eurasia'), whilst the electrifying magnitude ("pop pop!") of their early hard-edged rock material made a return on the likes of 'MK Ultra' and 'Unnatural Selection'. The slinky R'n'B of 'Undisclosed Desires' made for uneasy initial listening, but was easily one of the album's best tracks. Oh, and the 'Exogenesis' symphony was absolutely superb - an incredible achievement, but mainly just a beautiful, powerful piece of music. Thematically, The Resistance's Earth-bound 'humanity's screwed!' mantra also seemed to form some kind of continuity as a precursor to the Space-opera of previous album Black Holes and Revelations ("You must pay for your crimes against the Earth", proclaims Bellamy like some sort of alien judge on that album's opening track 'Take A Bow').


This week saw the announcement of a new album from Muse via a 'trailer' on YouTube:

So, it seems to be called The 2nd Law (apparently something to do with thermogenesis, and all that waffly talk in the middle of the video). It's apparently out in September. And oh boy, I don't feel good about this.

Firstly, I'm aware that this is a trailer. For all we know, it technically says nothing of the album's content (musical or lyrical), so as such any comment made is on the trailer itself and what the trailer seems to be presenting the album as being. Secondly, WHAT THE HECK.

To get the elephant in the room out of the way, that was Muse seeming to go all dubstep on us. Say what you will about Bellamy's use of a KAOSS pad and the fact that it appears to still just be the three of them making up the sound, but it's undeniable that the music they're creating there is not-so-distantly removed from Skrillex's hyper-energetic, commercialised "wubwubwubSKREE" take on the genre. This, apart from not being my cup of tea at all, is not inherently a problem in itself, although criticisms that the band are jumping on a bandwagon they've already missed are justifiable.

What IS a problem is everything else. Even before that whole sledgehammer of WTF drops, I was already cringing enough to require facial reconstructive surgery by the 1-minute mark. The rest of the video is guilty of the very worst that people less tolerant of Black Holes... and The Resistance turned their noses up at.

Cliché after cliché litters the screen - shots of the stock markets failing, the price of fuel rising, pollution from power plants filling the sky. "Look how bloody topical we are!", Bellamy seems to be bellowing into the ear of his captive viewer. "Don't you get it? It's like, the evil corporations running the world and stuff, and the system and everything, and CAPITALISM, right? And it's UN-SUS-TAIN-ABLE." Similar themes may have appeared in The Resistance, but at least that record, in pillaging so frequently and knowingly from Nineteen Eighty-Four, seemed to place itself in some sort of fictional dystopia, granting it more of a license to stray into ridiculous hyperbole. In locating itself in decidedly real-world issues, the trailer for The 2nd Law is almost relentlessly banal and downright cheesy in its imagery - not only does it lack imagination and retread old ground, but it appears as a caricature, a Spitting Image-puppet of all of Muse's previous works. At least there was the sense (or perhaps the hope) in The Resistance that the band itself was in on the overblown joke, but with this trailer, I feel more like I'm laughing at them rather than with them - the po-faced self-importance on display in the opening segment is ludicrous, made worse by the incredibly hackneyed symbolism being used.


And then just when you think it won't get any more cringeworthy, a sodding great evil CGI robot face whizzes around the screen in a matter which I'm pretty sure isn't supposed to be as utterly hilarious as it is. Factor in the aforementioned 'dad's having a go at dubstep' accompaniment and, ladies and gentlemen, I think we may have a disaster on our hands. Adding insult to injury is that awful silvery font that looked absolutely dire on Born This Way and looks similarly cheap and ropey here, a feeling which carries throughout the trailer.


There's still hope that this is all somehow a big joke, or a misrepresentation of what The 2nd Law will eventually be, but even as someone who's defended much of Muse's recent output (yawn-inducing Twilight soundtrack tune 'Neutron Star Collision' aside), this has made me facepalm right through my skull. Worst of all, it's everything that I've previously tried to argue that Muse's last few albums were better than. Maybe I was wrong. Now, if you'll excuse me, I'm off to go and listen to Origin of Symmetry and feel all superior and that.

Email ThisBlogThis!Share to TwitterShare to FacebookShare to Pinterest
Labels: muse