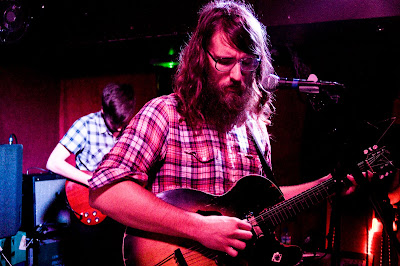 Having two local acts as support was a nice touch, with the brilliantly named Jimmy Floyd Hasselbaink up first. Their music showed signs of promise, sadly buried under inconsistent melodies and the sullen look of a thoroughly unimpressed bassist. Coal Train started strongly, though their final songs descended into disappointingly predictable mid-tempo fare, and so when Maps & Atlases took to the stage the audience was certainly ready for some well-crafted tunes.

And that they most definitely delivered, with all the technical precision and lively time signatures you’d expect from a math-rock group. Opening with Perch Patchwork highlight ‘Pigeon’, the delicate guitar riff kept the audience’s rapt attention. However, it soon became apparent that a poor sound mix wasn’t allowing the softly played yet exact guitar parts (often finger-tapped or finger-picked) to shine through. As the complex, toe-tapping rhythms of fan-favourite ‘Witch’ came and went, it became increasingly frustrating to see the frontman Dave and guitarist Erin displaying their practical skill, but not particularly being able to hear it.

The set highlights came with an acoustic four song encore performed on stools in front of the stage. EP title track ‘You and Me and the Mountain’ sounded absolutely gorgeous as the crowd watched in hushed awe, a truly special moment in an otherwise decent gig.

Maps & Atlases - The Ongoing Horrible, live at Newcastle Other Rooms:


Missed the pre-tour interview with the band? Click here to check it out!


Originally published on The Courier Online
Posted by ben