Noah And The Whale Interview 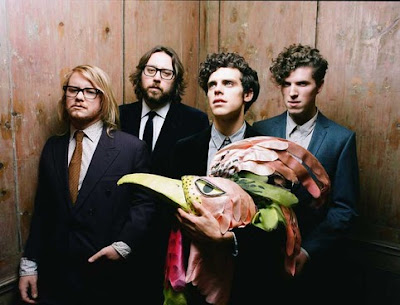 Look over the span of Noah and the Whale’s career so far, and one thing becomes particularly apparent. Forget the summer-dominating single ‘5 Years Time’, ignore that the band once included now-Brit-award-winning-soloist Laura Marling as a member, and you’ll see that Noah and the Whale know the art of creating an ‘album’ in the traditional sense of the word.

See, for instance, their debut Peaceful, The World Lays Me Down, with its sunny-sounding yet lyrically dark folk-pop tunes of love and death, or the beautiful, stark and heartbreaking follow-up The First Days Of Spring, and the vibrant optimism and classic pop production of latest album Last Night On Earth. Each are unmistakably Noah and the Whale, yet stand as self-contained bodies of work, representative of where the band were and what they were doing at that point. They evolve in sound, they develop in maturity, and advance thematically. They aren’t a handful of recordings thrown together in a release format – just as all the best records are, these are true albums.

“I think it’s important for albums to have a real coherency in sound and subject,” says Noah and the Whale frontman Charlie Fink. It’s an opinion that certainly shows in his songwriting. “Once we’d found the thread for Last Night On Earth, I knew where I wanted it to go.”

Last Night On Earth, which has received some brilliantly positive reviews (including here on Quiff Pro ‘Fro), is a wonderfully hopeful collection of ten classically-written mature pop songs, bristling with vitality, joy, and, most importantly, glorious, glistening melodies. It's an album which once again marks a startling progression from the band’s previous work, starting a brand new chapter in their career.

“I wrote the first song ‘Tonight’s The Kind Of Night’ on this train journey on New Year’s Day. It was just after we’d finished touring The First Days Of Spring for three months consecutively, and we were all shattered,” explains Fink about the initial conception of the album. “We’d had different band members coming and going, it was a difficult tour. I’d gone to Wales for New Year, and I was heading back to London, and just that moment there is where the whole album comes from really – the excitement of heading off into the unknown again, into the night, making a change for yourself. That song is really where I found the lyrical thread of the album, where I knew what the heart of the record was going to be.” 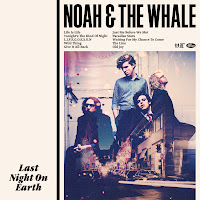 After the frank, personal outpourings of The First Days Of Spring, an amazing but incredibly sad album about Fink’s breakup with the aforementioned Laura Marling, the majority of Last Night On Earth shifts the perspective of the songs to the third person, focusing on a series of characters; “people living impulsively, and living with the spirit as if it were their last night on earth”. Talking of the change in writing style, Charlie claims: “It was mainly to test myself as a songwriter. I wanted to open up new ground. There’s a feeling that permeates songs that are about character writing.”

However, that’s not to say it’s any less personal an album. “The key is to not let that feeling obscure yourself, and on the contrary you find a whole family inside yourself when you write like that,” Fink explains. “You invest as much of yourself inside the song, it’s just a different expression, a different way of telling the story.”

This time around, the story is one of resolution and revolution, reconstruction and rebirth.

“Largely the theme of the album is people changing, and it’s often set against the background of the romance of the night time. Generally it’s about people making a change in their life, and it was kind of a transformative year for me. However well I tell a story, I’m never going to hold anything of myself back in the songs. I find it impossible not to be honest in songwriting.”

Trying to obtain a classic pop sound (Fink acknowledges influences from Springsteen’s Darkness On The Edge Of Town, Fleetwood Mac’s Rumours, Prince’s Dirty Mind, Arthur Russell’s Calling Out Of Context, Brian Eno’s Before And After Science and Another Green World, as well as various Tom Petty records) made recording the album the most challenging studio experience for the band yet.

“This album took significantly longer than the previous two albums to make, even though they’re only three-and-a-bit minute songs,” says Fink. “I wanted to make as direct a record as possible, and a pop record. I think the hardest part is to have the confidence at the right time to keep it simple, and I didn’t want it to have any extra weight on it, I wanted everything to be broken down to the essentials. I wanted the stories to be as concise as possible, so that was the most difficult thing.”

Following the top 20 hit single ‘L.I.F.E.G.O.E.S.O.N.’, ‘Tonight’s The Kind Of Night’, Last Night On Earth’s thematic anchor, is the second track to be released from the album for that reason. According to Fink, it “just seemed like a natural choice for a second single”. Adding to the creative control over their music, Fink himself directed the music video, with previous experience of directing the 50-minute film companion piece to The First Days Of Spring. It’s a fantastically restrained short, successfully capturing the seeming insignificance and intimacy of moments that could well become lifechanging.

“I didn’t want it to be overblown, because those moments can seem insignificant and surprising, those moments that change everything,” Fink claims.

He adds: “I’d love to do a full-length film at some point, it just depends on time, but down the line I’d love to.”

Looking back to the early part of Noah and the Whale’s career, they’ve come a long way since the song that brought them into mainstream attention, the seemingly cutesy but actually bittersweet single ‘5 Years Time’. Does the band feel constrained by the song that still threatens to define them?

“It’s hard, it’s such a big part of the history. In a way, I know that song’s given us great opportunities to go and make these two records how we wanted. I never know really what to think about it. I feel like people are coming more to terms with it, more and more are hopefully seeing it with some sort of relevance within our career so far,” admits an honest Fink. “I hope people enjoy the way we’ve changed – it’s rare that bands get the time and opportunity to develop. It’s cool that we’ve managed to start with songs like ‘5 Years Time’ and then go on to do different things. It is what it is, basically!”

However, Fink does confess that it wasn’t always a welcome addition to the live show.
“We didn’t play it for a while,” he says. “Now I just kind of feel like there’s a certain split in the audience of people who really want to hear that song and people who aren’t so bothered. I feel like with our shows, people work hard to earn the money to buy our tickets, and part of me just wants to leave them satisfied – I don’t mind playing it to keep those people happy.”

With ‘5 Years Time’ having made its way back onto the live setlist, the current tour celebrates all stages of Noah and the Whale’s constantly developing style, despite the deeply personal (at times uncomfortably so), emotional content of The First Days Of Spring.

“We do five or six from First Days Of Spring live. I still love that record a lot. It’s funny, it’s had a kind of resurgence that album. It came as quite a shock to some of the fans of the first record, and I think it took a while for the people who might like that album to discover it. It’s good now, people really want to hear those songs which is always good!”

Whilst a significant amount of time has passed since that album was released, the emotional impact of the songs never lets up. Though it’s all in the past for Fink, performing the songs live still evokes varying emotional reactions.

“I think you always emotionally connect with a song when you sing it, but often they take on different meanings to you. You can have a different perspective on a song, and it can take on a new significance within your life. The biggest thing is the emotion and the energy of the crowd, it definitely brings the songs back to life again, that reaction and feeling a part of that.”

With another UK tour setting off at the beginning of May, now is the perfect time to see Noah and the Whale in high spirits. Last Night On Earth is “connecting really quickly” with audiences and the band are on top form. Fink promises that “relative to the record, the live show is a bit rockier, there’s a bigger guitar sound, and it’s a bit more energetic”. The band certainly seems to be following the characters of the latest album, living in the moment and enjoying the opportunities that life brings up. As Charlie muses towards the end of our chat: “The key is to live every night like it’s your last night on earth, and then just let it happen.” It’s an ethos which, in the light of the latest album, is pretty difficult to argue with.

Noah and the Whale - Jocasta by bejeebus

Noah And The Whale - Blue Skies by ieatcatlitter


Last Night On Earth is out now, and it’s flipping amazing so buy it. See the band play live in the UK from May 3rd - 18th.
Posted by ben

Email ThisBlogThis!Share to TwitterShare to FacebookShare to Pinterest
Labels: interview, noah and the whale