Childish Gambino: Everything In Its Right Place 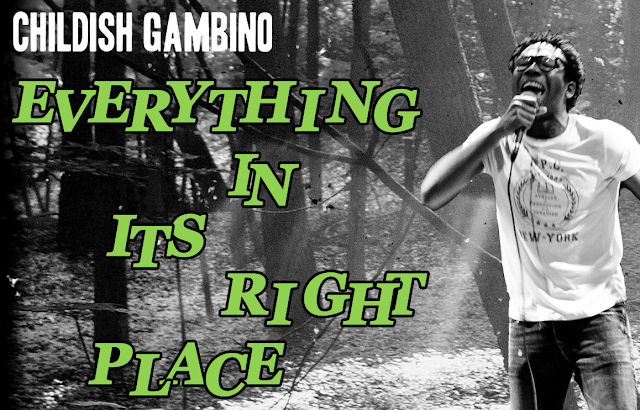 It sounds like such a backhanded compliment when you say it at first. It's not the most obvious way to praise an album - usually you'd go for, 'the tunes are amazing', or 'it's lyrically brilliant', or something along those lines. To praise something seemingly superfluous to a record itself could come across as derogatory. But it's true - the best thing about Childish Gambino's label debut Camp is the way it's sequenced.

Sequencing is a funny thing. In some ways, the better the track sequencing on an album is, the less you notice it. It's only when something seems out of place that it can feel strange, that the flow of an album can be suddenly interrupted by a bit too much of a lull here, or a desperate need for a chilled-out track there. Case in point: The Hold Steady's fantastic 2008 album Stay Positive. It's an album I really, really love, and so for Christmas I asked for a wonderful double LP version - for some reason, the tracklisting is slightly different. Two tracks in the middle are switched over, and the latter half is given a bit of a re-shuffle with an (amazing) extra track in there too. Overall, it's nothing too massive, but on listening to the album it just doesn't quite flow as well - it's nothing too great, but it's noticeable. Incidentally, at the moment of writing, Stay Positive on CD (limited edition with three incredible bonus tracks) is currently less than £4 on Amazon, I highly recommend it. 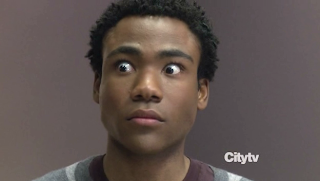 So, back to Gambino, aka Troy from Community.


Released in November last year, Childish Gambino (real name Donald Glover) put out Camp, following a string of free online releases, including debut album Culdesac (still free, here), and the EP, erm, EP (reviewed by our 'Fro here). Now, I never really clicked onto EP in the same way that Elliot did - I did really like 'Freaks and Geeks', even though it seemed to have a worryingly strong fixation on, well... a particular lady-part.

It had some snazzy lyrics, but aside from cracking wise, I couldn't help but be left wondering whether Donald Glover really had anything in particular to say. Well, I was pretty blown away on my first listen through Camp - the wit remained, but here was a record with a bruised heart as well as an erect penis. Over the past few months, the album's fluctuated in my mind between unrelenting praise and a nagging feeling that maybe I've overrated it. As it turns out, the track sequencing, for me at least, is the real key to the record. You'd be hard-pressed to really call Camp a concept album, but it's structured in such a way that it feels like one.

Camp isn't a perfect record by a long way. Take any track on its own, and you'll find a flaw with most of them. In hip-hop music, there are so many cliches to tread around - how hard life is on 'the streets', how much money you're making, how many hoes you've got in your bedroom, and how you're the 'realest' in 'the game'. Pick apart the Childish Gambino album and you'll tick all of these off your list. BUT, take the album as a whole and the album provides a pretty startling, intimate portrait of who Gambino is, and why these cliches are adhered to and subverted.

Opening track 'Outside' is lyrically heavy, heartbreakingly detailing aspects of Glover's upbringing, his parents working themselves to the bone to get him into a different school and his feelings of separation from his extended family and 'the hood' after leaving the Bronx. It may sound a bit cheesy, but the utter conviction of his delivery and the little details make it a powerful, touching opening statement. And not a mention of ladyparts in sight.

Following up that dramatic track comes 'Fire Fly', shifting the perspective from Gambino's youth to his current situation. "Being me isn't as hard as it used to be", he assures us, and it shows in the tone of the track - the thunderous drums of 'Outside' are replaced with buoyant synths, the mood is optimistic, the lyrics celebratory. Despite the deplorable use of the term "shawty", which no rapper can ever get away with, it's a brilliant track that serves as the opposing book-end to 'Outside', as the album jumps from the beginning of Glover's life to the present. Most importantly, it sets Gambino up as the nerdy kid from the projects who, against all the odds, made it big: "These black kids want somethin' new, I swear it/Somethin' they wanna say but couldn't cause they embarrassed/All I do is make the stuff I would've liked/Reference things I wanna watch, reference girls I wanna bite". Again, it sounds a bit cheesy when typed out, but Gambino sells it.

Those two tracks set up some of the recurring themes of the album, but leave Childish Gambino exposed - if he's living a pretty easy life now, where does the crucial rap ego come into play? Step forward track three, first single 'Bonfire'. Fittingly, it's basically just a song full of burns and references to, yes, ladyparts. It's full of the OTT wordplay that made poring over the 'Freaks and Geeks' lyrics such a joy - from the multi-layered "Butcher and I know it, man, kill beef, go HAM" to the amazingly crude "“You're my favorite rapper now” Yeah, dude, I better be/Or you can fuckin’ kiss my ass, human centipede".

Now, on its own, 'Bonfire' sounds crass and somewhat hollow, but the tracks that surround it show exactly why - if 'Outside' didn't strike you as vulnerable and insecure, 'All The Shine' and 'Letter Home' (tracks four and five, respectively) certainly will. In fact, the former in particular is almost uncomfortably confessional. As he says over mournful strings "I rap about my dick and talk about what girls is fly/I know it’s dumb, that’s the fucking reason I’m doing it/So why does everyone have a problem with talking stupid shit?", it seems to be a direct reaction to his own crassness on 'Bonfire' - on the one hand, his persona on that track is one that he needs to prove himself to the naysayers, but it doesn't define or represent Childish Gambino, and is balanced against a much more sensitive underdog persona. That's not to say he doesn't want to rap about those things, but it doesn't feel like a coincidence that the fiercest track on the album so far is immediately followed by a confession.

The same can be said of 'Letter Home' - a short but stunning track which sees Gambino admitting to someone that "you're the only girl that I have ever wanted", though adding "yes I've had some alcohol - I'm sorry". It's incredibly intimate, and followed up by the bombastic Justice-esque snyths of 'Heartbeat', which retains the lyrical theme, but on a much bigger scale. From 'All The Shine' through 'Letter Home' to 'Heartbeat', the songs seem to grow into one another - the explanations of the former evolve into a heartbroken confession in the middle, followed by anger over past relationships.

'Heartbeat' is the most expansive song on the album so far, but the lyrics are still vulnerable - this is again balanced out by the harsh beat and lyrical putdowns of the next track (my personal album highlight) 'Backpackers'. Taking all the criticism aimed at him and turning it into a series of punchlines and putdowns, 'Backpackers' comes across as being as much of a defence mechanism as an expression of Gambino's talent for devising brilliantly convoluted multi-layered lyrics. People saying he's "lame as fuck"? He retorts: "But I rap like these niggas ain't got shit on me". It's a fierce track, and still manages to get a Teenage Mutant Ninja Turtles reference in the chorus. Check out the full lyrics here, they're insane.

I'm going to wrap this up shortly, as the album continues in this vein through its final tracks - though much of Camp is made up of witty punchlines, dick jokes and fascinations with the female anatomy, there's a surprising vulnerability bubbling beneath the surface which only really comes to the fore when the album is listened through as a whole, revealing Childish Gambino to be a much more interesting persona than might initially seem. When I take 'Bonfire' on its own, I find it too crude. When I hear 'All The Shine' out of context, it sounds a bit soppy. When I hear 'Backpackers' separately? Well, that one is always awesome. Camp is an album that is perfectly structured to build up the central character of just who exactly the multifaceted Childish Gambino is. Is he the kid who had a hard time growing up? Is he the guy who's beaten the odds and turned himself into a star? Is he that insecure one who throws out insults to stop himself getting hurt? Well, journey through the whole of Camp from start to finish, and I hope you'll find that he's all of those things and more. Whether you decide to read into all of the lyrics fully or not, many will find enjoyment in the R'n'B pop hooks of tracks like the ebullient 'Sunrise' and 'Fire Fly', but there's a lot to be found underneath the surface.

On a very, very final note, I can't go into this album without talking about closing track 'That Power', which devotes about five minutes to a genuinely powerful spoken word piece. It not only completes Camp, but sums up everything that you feel Childish Gambino has been trying to get across in a single monologue. It's completely brilliant and heartbreaking, and absolutely makes the album. People might say that it shows Glover's skills as a scriptwriter more than it does as a songwriter. Whatever - it's an integral part of the album, and serves as the perfect stopper on a record that many will have listened to expecting a jokey side-project, instead finding an album that not only stands up to the modern hip-hop classics, but successfully takes the listener into the mind of the artist. All together now - Gambino is a mastermind...

Camp is out now, and it's a pretty special record. Pick it up here.
Posted by ben