Album Review: The Leisure Society - Into The Murky Water 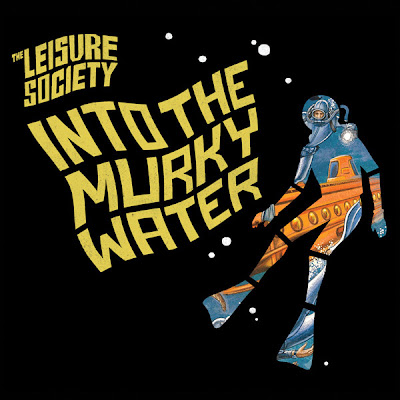 Another very late review here, and another album which provided great company in the library while I slogged away at my mountainous pile of essays until the wee hours. Yes, the second album from The Leisure Society came out a fair few weeks ago, however the fact that it's still getting regular plays at Quiff HQ is testament to what a great album Into The Murky Water is.

Fronted by Nick Hemming (who it seems obligatory to mention once played in a band with Shane Meadows and Paddy Considine), the eight-piece group were notably nominated in the 'Best Song Musically and Lyrically' category at the Ivor Novello awards for 'The Last Of The Melting Snow' from debut album The Sleeper. Though they didn't win, Hemming's ability to masterfully craft songs really is remarkable, and surely places him at the forefront of British songwriting. Into The Murky Water is, as its title would suggest, adventurous and exciting, but with a dark undercurrent.

The opening seconds of first track 'Into The Murky Water' are wonderfully cinematic - there's an immediate sensation of submersion, a plinking glockenspiel, flurrying strings and thumping drums really giving the impression of a descent into the deep. As the chorus arrives, so too does a huge, beautiful melody, with gently swaying, tidal composition. The whole thing plays out like some sort of wide-eyed underwater discovery, full of musical flutters, grand, harmonising backing vocals and a real sense of exploration: 'The Life Aquatic with Nick Hemming', if you will. It's a perfect opener, and an immediate example of the band's use of all eight members to create an amazingly immersive, atmospheric five minutes of music. The almost Arcade Fire-esque stomp of 'Dust on the Dancefloor' is a real blast, with a surfy bassline, and a wonderful buildup to the toe-tapping conclusion. 'Our Hearts Burn Like Damp Matches' is a '...Melting Snow'-esque delicate acoustic ballad, with fantastic use of piano to accentuate one of the album's most touching vocal melodies, as Hemming sings "Hollow words sit silent in my mouth/Reasoned voices idle on the ground". Similarly, 'I Shall Forever Remain an Amateur' begins as a low key acoustic track, before blossoming with soaring strings and playful flute arrangements.

Into The Murky Water's highlights arrive at the centre of the album in the forms of 'You Could Keep Me Talking' and 'This Phantom Life'. The former begins with a pomp-filled staccato horn and string riff, with wonderful use of dynamics in the subdued pre-chorus, before suddenly giving way to a fantastic burst of vibrant instrumentation. The track builds into an awesome crescendo with a squealing distorted guitar, around the brilliant couplet "Most folks collide with such sickening ease/Their instincts arrives as my intellect leaves". It's an incredible song, only bettered by the aforemention epic 'This Phantom Life'. As the gorgeous instrumental introduction sunddenly launches into a full-on, dizzying arrangement of guitars, organs, strings and gigantic vocal harmonies, 'This Phantom Life' is a masterpiece of complex, intelligent, well-written British pop music. It's a perfect summer song, absolutely brimming with postivity and vitality. It has the best chorus on the album (both in terms of music and lyrics), as the whole band belts out "If we only knew the answers, we could print them up onto T-shirts/We could sing for revolution, we could fight all our wars and win them/Or while away the summer days in a day-dream". There's even a jazz-flute (yazz-flute?) solo in there somewhere, an audacious move which actually fits the song perfectly.

The only drawback of 'This Phantom Life' is that a few of the tracks towards the end struggle to live up to it. Whilst 'The Hungry Years' is touching and poignant with fantastic lyrics, 'Better Written Off (Than Written Down)' is a country-tinged number which, with its Western American sound feels a bit at odds with the overtly British feel of the rest of the album. It's certainly not a bad song, and not one that you'd skip, but it never reaches the heights of the sensory blast of what's come before. Luckily, 'Just Like The Knife' provides an excellent closer. If 'Into The Murky Water' was the album's plunge into the deep blue, 'Just Like The Knife' is the ascent to the surface. It's a fairly calm and relaxed retreat from the thrill of the preceding adventure, but it's still full of the quirks that make The Leisure Society's music so distinctive.

Overall, this is a fantastic album which sees Hemming and the band more than live up to the promise of The Sleeper. With it's nostalgic '60s British pop sound, there's nothing particularly 'cool' about Into The Murky Water - it's certainly no 'hot new sound', and it's unlikely to feature on the hottest NYC blogs, but it's so amazingly composed and well-written that it really does demand your attention. Lyrically, it's surprisingly deep, with wryly observed couplets and a surprisingly dark tone, while the music itself is full of so many twists and turns that it's a joy just trying to keep up, and you'll never know where it's heading next. Also, it's definitely worth noting that the presentation of the CD is incredible - not only is the album cover already one of the year's best, but the book-style casing and fantastic artwork really makes the physical release worth your hard-earned cash. It wouldn't be surprising to find the band on the nominations list for the Ivor Novellos (yet again) or the Mercury Prize this year - and with Into The Murky Water, they've got a bloody good chance of nailing it.

The Leisure Society - This Phantom Life by pdis_inpartmaint


Into The Murky Water is out now - buy it on Amazon here. They've also announced a big UK tour, check out the dates here.
Posted by ben