This is already a massive post, so we'll keep this intro short - here's the first half of what happened when Quiff Pro 'Fro went to Dot To Dot all day festival in Nottingham. We saw loads of awesome bands, many that you should really check out - check out our live tweets from the day here.

The first band of the day was Spotlight Kid, a local band with a very strong My Bloody Valentine influence. Though on record the band could easily have emerged from the early 90s, live they just about managed to differentiate themselves, with a three-guitar attack that filled the large but fairly empty (well, it was only 3pm) space of the Nottingham Trent Union’s main room.

Lead singer Katty, surrounded onstage by the other five members of the band, put on a decent show to those who had turned up early, but unfortunately the band underestimated the length of their own set and had to leave a song early. (Typical shoegazers - so engrossed in their own music they forget about everything else going on around them!) Despite the anticlimatic end to the set, it was a pleasant throwback to a time when vocals were mixed lower than the bassline.
-Elliot

Spotlight Kid- 'All Is Real' by Type PR

A quick dash upstairs to the Trent Uni Pulse saw electro rockers VETO take to the stage. Aside from a quick search on the Hype Machine, neither Elliot nor I knew very much about the band at all - it was certainly a surprise then when lead singer Troels Abrahamsen introduced them by saying: “Hi, we're VETO from Denmark. Sorry about the whole Viking/rape thing”.

It was a nice ice-breaker, and the compact crowd seemed impressed with the group’s seamless blending of dark, industrial rock and electronic samples and synths. It’s a combination that can often seem disjointed in other bands, however VETO seemed adept at blurring the middle ground between genres, with plenty of danceable squelches of bass, anthemic melodies and a noticable moodiness. It was a really tight set, with Abrahamsen hitting every note perfectly, and precise drumming keeping the whole thing neat and self-contained as opposed to sprawling and self-indulgent.

VETO’s dark, throbbing beats would definitely have benefitted from a darker room than Pulse or a later evening slot, however the fact that the crowd stuck around showed that the tunes are strong enough in their own right. There were a few very passionate crowd members there, and definitely a load of new fans at the end of the set.
-Ben

With a 30 minute wait between VETO and Stagecoach, we wandered over to the Trent Main Room balcony to catch a few minutes of the decent Hot Horizons before heading back into Pulse to get a good place in the crowd for one of my most anticipated sets of the day. We’ve bigged up Stagecoach before on the blog (see this piece on new single ‘Jonah Lomu/Tony Hawk’, or this bit about the Crash My Ride EP), and having interviewed them (watch out for that soon!) only an hour earlier, I was pretty excited to finally see these guys live.

Well, they didn’t disappoint. All of the energy you hear on their recordings is amplified live, and as ‘Hieroglyphics’ kicked the set off, frontman Luke Barham was already clambering onto the bass drum, whilst mandolin player Tom, in full sports kit complete with sweat bands, jumped straight into the front of the shocked crowd.

Taking in tracks from both the We Got Tazers! and Crash My Ride EPs as well as both tunes from the new single and ‘Not Even Giles Would Say We’ll Be OK’, the setlist showcased most of the band’s best two-minute distorted power-pop nuggets. ‘Map To The Freezer’ was an obvious highlight - for anyone else who saw the set, I was the guy at the front going mental for it with my arms in the air.

The audience seemed to enjoy the set despite the unatmospheric setting, though a bit more dancing wouldn’t have gone amiss. However, the sheer enthusiasm of the band and ridiculously fun tunes meant that this was one of the best sets of the day, with all band members running through the crowd at the end of ‘Good Luck With Your 45’ providing an exhilarating finale.
-Ben

Stagecoach - Not Even Giles Would Say We'll Be OK by idlehandsclub

After the high energy of Stagecoach’s set, it was time for a bit of a break. A wander round Talbot Street brought us to The Rig in Rock City, where I bought a rather delicious chocolate brownie, and Elliot spontaneously decided to get his ‘Fro trimmed. Like a real friend, I watched, laughed and drank from his pint while he was unable to move in the barber’s chair. 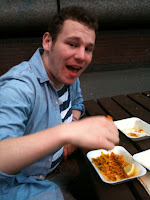 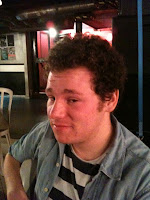 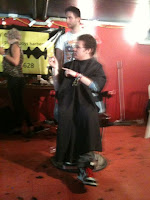 The 'before', 'during' and 'after' snaps...
Returning to the Trent Main Room we caught the end of Benjamin Francis Leftwich’s set, and he sounded excellent as ever. His wonderfully delicate songs drew a huge crowd (notably lots and lots of female fans...), with new single ‘Box Of Stones’ getting a great reaction after heavy rotation on Radio 1. The gorgeous simplicity of Leftwich’s tunes is hypnotic, with such atmosphere in the gently plucked strings and almost whispered vocals that the audience can’t help but be drawn in. ‘Maps’ and ‘Atlas Hands’ from debut EP A Million Miles Out sounded particularly lovely. His debut album Last Smoke Before The Snow Storm is out in a few weeks and is sure to place him at the forefront of British singer-songwriting - make sure you see Leftwich while he’s still playing intimate venues. He’s a brilliant and poignant performer, and the more personal setting you see him in the better.
-Ben

Leftwich provided the calm before the oncoming storm of Dananananaykroyd - without a doubt the act I was most looking forward to seeing on the day. They’re one of the best, most exciting and intensely fun acts I’ve ever seen, and after a break to record their forthcoming second album There Is A Way, I couldn’t wait to behold them again.

My most anticipated act sadly turned out to be the biggest disappointment. As ever, the band played brilliantly - singers Calum and John Baillie Jr. flung themselves across the stage with uncontrollable excitement, while guitarist Duncan semi-star jumped on the spot. David Roy’s incredible fretwork was impressive as always. While a poor sound mix made it very difficult to hear the vocals, the problem wasn’t the band.

It was the crowd. Any energy put across from the band was in no way returned. There was no dancing, no jumping around, and hardly even any heads bobbing. What was going on?! Despite being stood in front of one the most exhilirating live acts currently around, the crowd weren’t interested. You might have thought that as soon as Calum and John vaulted the barrier and headed into the audience during ‘The Greater Than Symbol and the Hash’, the crowd would go nuts. Well, only two people did, and one of them was me. Everybody else? Shame on you.

On a more positive note, the tracks from new album sounded great, ‘Muscle Memory’ was awesome live, and the guys were as hilarious as usual. Still, they might as well have been playing to a brick wall.
-Ben

From one high-energy band to another: up next was The Joy Formidable, the grungey three-piece from Wales bringing back loud-soft dynamics with a vengeance. Frontwoman Ritzy Bryan is a joy to watch - all googly eyes and smiles, she seems far too small and sweet to be playing such powerful, energetic riffs.
And what a set it was: all of the key songs from their impressive debut The Big Roar, including the likes of ‘Cradle’ and ‘Whirring’, the epic finale of the latter building to a massive set-closing crescendo. A haunting version of ‘Buoy’, in particular sounded incredible in the large venue.

The crowd was half-decent too - despite the moshing-unfriendly nature of The Joy Formidable’s drawn-out riffs - and definitely came away satisfied. With a live act this good, I’d highly recommend seeing them while you get the chance - in a few years’ time they’ll be filling up stadiums.
-Elliot